S. 2231 (114th): A bill to express the sense of Congress that the Government of the Maldives should immediately release former President Mohamed Nasheed from prison and release all other political prisoners in the country, as well as guarantee due process for and respect the human rights of all of the people of the Maldives. 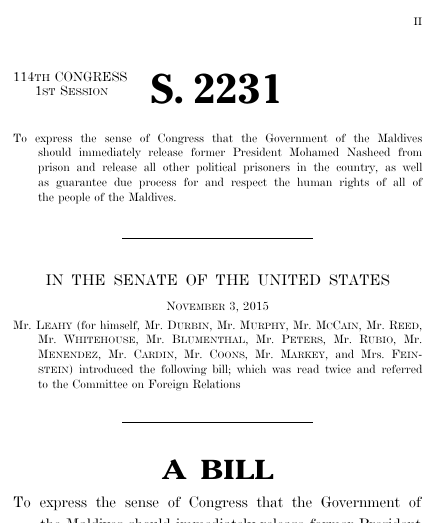 This bill was introduced on November 3, 2015, in a previous session of Congress, but it did not receive a vote.

Bills numbers restart every two years. That means there are other bills with the number S. 2231. This is the one from the 114th Congress.

A bill to express the sense of Congress that the Government of the Maldives should immediately release former President Mohamed Nasheed from prison and release all other political prisoners in the country, as well as guarantee due process for and respect the human rights of all of the people of the Maldives, S. 2231, 114th Cong. (2015).