The Federal Reserve Transparency Act of 2015 would have opened up the Federal Reserve System to a more complete audit. The bill, long advocated for by its sponsor Sen. Rand Paul (R-KY) and his father, former Rep. Ron Paul (R-TX), was rejected by a vote of 53–44, with most Republicans voting in favor and most Democrats voting against. Sixty votes were needed to advance the bill.

What would the “Audit the Fed” bill have done?

Under current law, the Federal Reserve System (“the Fed”) — a quasi-governmental organization that acts as the country’s central bank— does undergo regular audits. Private audit firms, like Deloitte & Touche, conduct audits of the Fed’s financial statements (here’s one from last March) and the Government Accountability Office, a government agency, conducts … 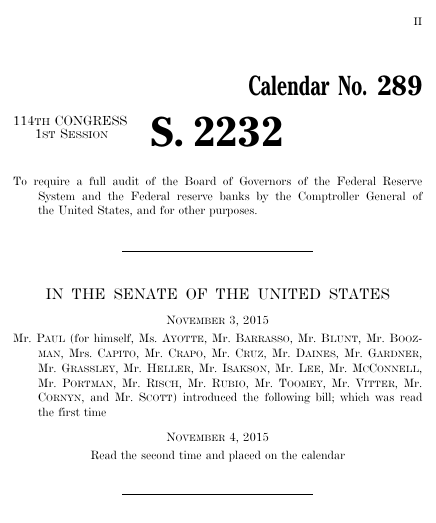 This bill was introduced in a previous session of Congress but was killed due to a failed vote for cloture, under a fast-track vote called "suspension", or while resolving differences on January 12, 2016.

Bills numbers restart every two years. That means there are other bills with the number S. 2232. This is the one from the 114th Congress.