Last week presidential candidate Sen. Bernie Sanders (I-VT) signed on as a co-sponsor to a bill that would repeal legislation that he voted for in 2005. Sanders, a self-described “socialist,” ranks as the most progressive senator according to GovTrack’s ideology scores, but there is one issue on which he hasn’t been the most liberal Member of Congress: guns. And presidential nomination rival Hillary Clinton has attacked a vote Sanders cast in 2005 shielding gun manufacturers from lawsuits when their products are used in crimes.

S. 2469, “A bill to repeal the Protection of Lawful Commerce in Arms Act,” was introduced last week by Sen. Richard Blumenthal (D-CT). (A related bill in the House, H.R. 4399, the Equal Access to Justice for Victims of Gun Violence Act, was introduced … 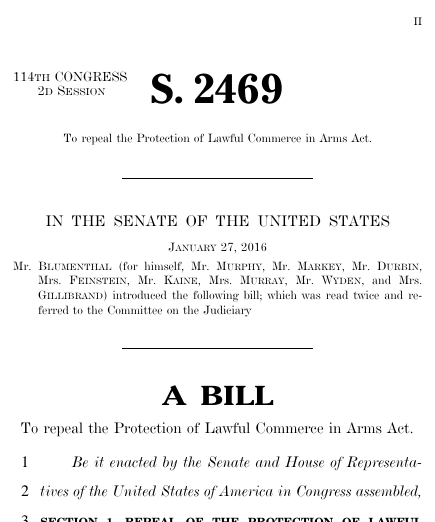 This bill was introduced on January 27, 2016, in a previous session of Congress, but it did not receive a vote.

Bills numbers restart every two years. That means there are other bills with the number S. 2469. This is the one from the 114th Congress.