A bill to protect crime victims' rights, to eliminate the substantial backlog of DNA and other forensic evidence samples to improve and expand the forensic science testing capacity of Federal, State, and local crime laboratories, to increase research and development of new testing technologies, to develop new training programs regarding the collection and use of forensic evidence, to provide post-conviction testing of DNA evidence to exonerate the innocent, to support accreditation efforts of forensic science laboratories and medical examiner offices, to address training and equipment needs, to improve the performance of counsel in State capital cases, and for other purposes. 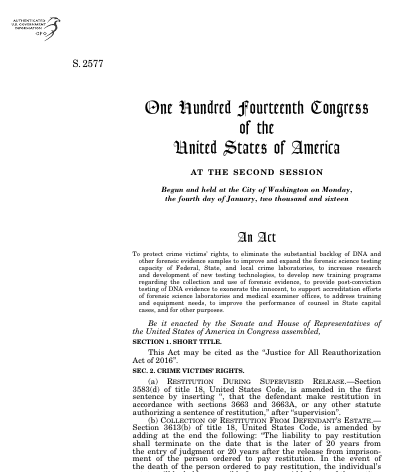 Bills numbers restart every two years. That means there are other bills with the number S. 2577. This is the one from the 114th Congress.