It’s not every day that the third-ranking Senate Democrat Chuck Schumer (D-NY) and arch-conservative Tea Party ideological leader Sen. Ted Cruz (R-TX) cosponsor a bill together. But if there’s one thing they both dislike, it’s Nazis.

S. 2763, the Holocaust Expropriated Art Recovery (HEAR) Act, would replace the current statutes of limitations set by states for prosecuting art thefts with a federal six-year statute of limitations starting from the time the theft is identified. This is to clarify the confusion created by some lawyers arguing that the statute of limitations lasting only a few years should start when the crime was committed — in many cases, the 1940s.

An estimated 20 percent of all European art was looted by the Nazis during World War II, and … 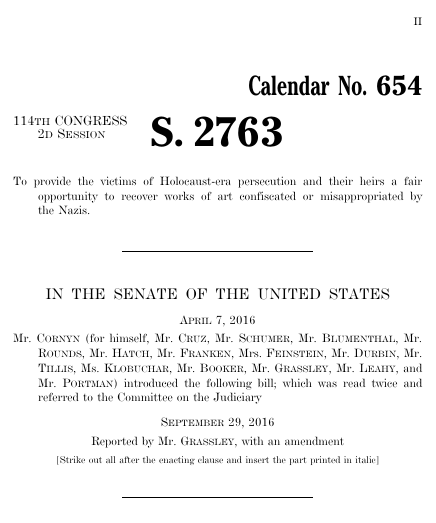 Bills numbers restart every two years. That means there are other bills with the number S. 2763. This is the one from the 114th Congress.