A “sanctuary city” is a city that protects illegal immigrants from federal or state prosecution, either by expressly prohibiting or never requiring legal inquiries about immigration status. There are more than 300 sanctuary cities in the United States.

There have been many Republican attempts to prevent sanctuary cities. The latest is S. 3100, the Stop Dangerous Sanctuary Cities Act, which would withhold certain federal grants from sanctuary cities. The bill was introduced last week on June 27 and made it past committee the next day. While it may receive a Senate vote, the White House has threatened to veto similar previous bills.

Many sanctuary cities have another, more controversial, practice to protect illegal immigrants convicted of crimes from being deported. An immigrant arrested for an unrelated … 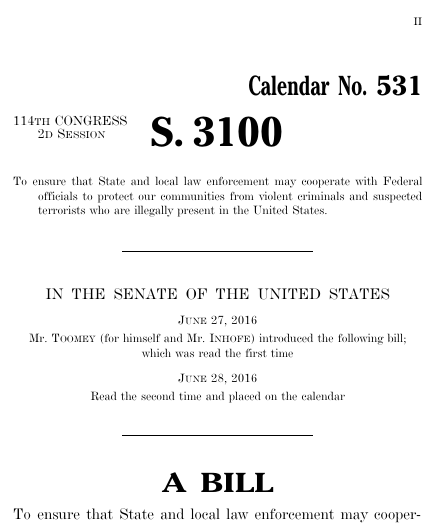 This bill was introduced in a previous session of Congress but was killed due to a failed vote for cloture, under a fast-track vote called "suspension", or while resolving differences on July 6, 2016.

Bills numbers restart every two years. That means there are other bills with the number S. 3100. This is the one from the 114th Congress.