The United States is the only country to have used a nuclear weapon in warfare, doing so twice in 1945 against Japan. President Obama has publicly expressed his wish for a worldwide end dismantling of all nuclear weapons, signed the New START Treaty with Russia that decreased both Cold War powers’ nuclear stockpiles, and became the first sitting president to visit Hiroshima, the site of the first nuclear bomb’s impact. In his final months in office, some speculate Obama might also create a “no first use policy.”

A new bill, the Restricting First Use of Nuclear Weapons Act, H.R. 6179 andS. 3400, was recently introduced in Congress with the hopes of codifying that proposed change. 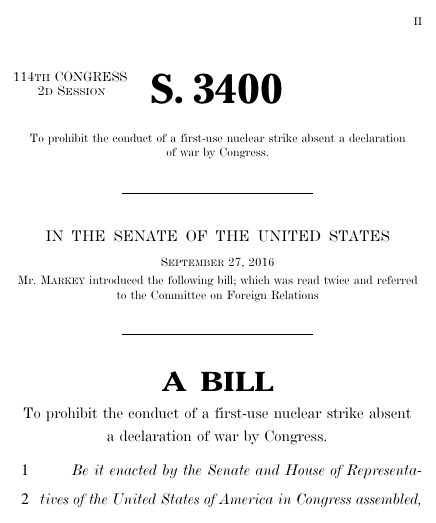 Bills numbers restart every two years. That means there are other bills with the number S. 3400. This is the one from the 114th Congress.