Republican Presidential candidate Donald Trump wants to end birthright citizenship. Currently the status quo policy in America, ever since the 14th Amendment was passed shortly after the Civil War, anybody born on U.S. soil is automatically made a citizen, even if neither of their parents are. About 300,000 children a year — roughly eight percent of new babies born in America each year — are to noncitizen parents, but are instantly citizens under the status quo.

There’s legislation in this Congress that would end the practice, enacting the same policy that Trump shocked the nation by calling for. But this legislation was introduced seven months prior to when Trump first announced his plan last August. 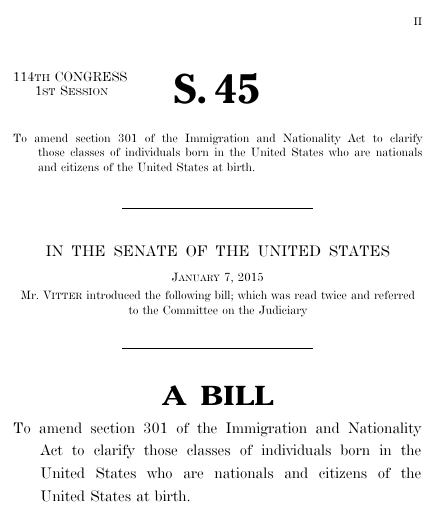 Bills numbers restart every two years. That means there are other bills with the number S. 45. This is the one from the 114th Congress.