An estimated 21.1 percent of U.S. residents now speak a language other than English at home, according to the U.S. Census Bureau. That’s 63.2 million residents, approximately doubled since 1990 and tripled since 1980. Some members of Congress see this as a worrying sign or even a threat.

Rep. Steve King (R-IA4) and Sen. Jim Inhofe (R-OK) are two such members. Together they’ve introduced H.R. 997 and S. 678, the English Language Unity Act, in the House and Senate. The legislation would declare English the official language of the United States and require that all people attempting to become citizens show English language proficiency.

Supporters say the legislation would create a common bond and prevent miscommunication. They also note that 31 states have adopted English … 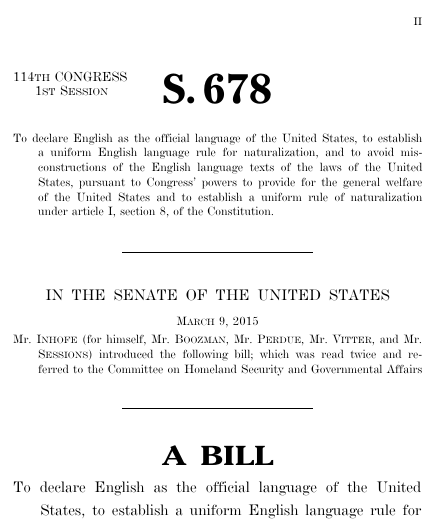 This bill was introduced on March 9, 2015, in a previous session of Congress, but it did not receive a vote.

Bills numbers restart every two years. That means there are other bills with the number S. 678. This is the one from the 114th Congress.