S. 764 (114th): A bill to reauthorize and amend the National Sea Grant College Program Act, and for other purposes.

This bill was the vehicle for passage of the Safe and Accurate Food Labeling Act, which is the form it was enacted it. Prior to amendments, the bill regarded defunding Planned Parenthood and the National Sea Grant College Program.

The bill took on this form after the Senate's last vote, on July 7, 2015, on the measure, which replaced earlier text of the bill with the provisions related to genetically engineered food.

Prior to the Senate's vote, the bill was the Defund Planned Parenthood Act of 2015, … 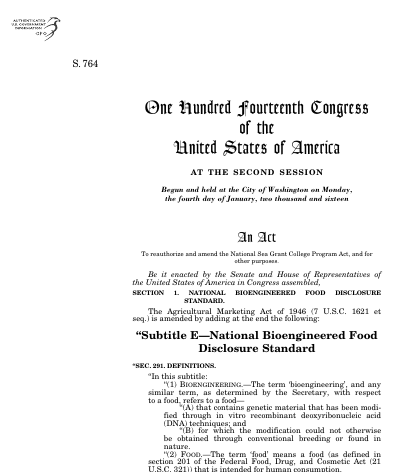 Bills numbers restart every two years. That means there are other bills with the number S. 764. This is the one from the 114th Congress.