S. 800 (114th): Enhancing the Stature and Visibility of Medical Rehabilitation Research at the NIH Act

A bill to improve, coordinate, and enhance rehabilitation research at the National Institutes of Health. 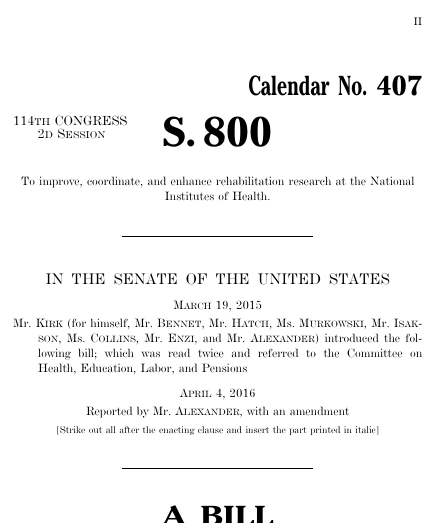 Bills numbers restart every two years. That means there are other bills with the number S. 800. This is the one from the 114th Congress.

GovTrack.us. (2021). S. 800 — 114th Congress: Enhancing the Stature and Visibility of Medical Rehabilitation Research at the NIH Act. Retrieved from https://www.govtrack.us/congress/bills/114/s800

Enhancing the Stature and Visibility of Medical Rehabilitation Research at the NIH Act, S. 800, 114th Cong. (2015).