This month saw the largest safety recall in American history: approximately 43 to 48 million car airbags made by the company Takata, which are currently in some 34 million vehicles in the United States. The National Highway Traffic Safety Administration (NHTSA) made the announcement after 10 confirmed fatalities occurred from metal shards in the airbags, killing passengers that the devices were intended to save.

(Important side note: check here to see if your car is among those covered under the recall. It could save your life.)

Current federal law prevents selling new recalled cars until they are repaired but does not impose the same requirement on used cars. In light of last week’s historic announcement, the issue is back in the headlines again — as is an October … 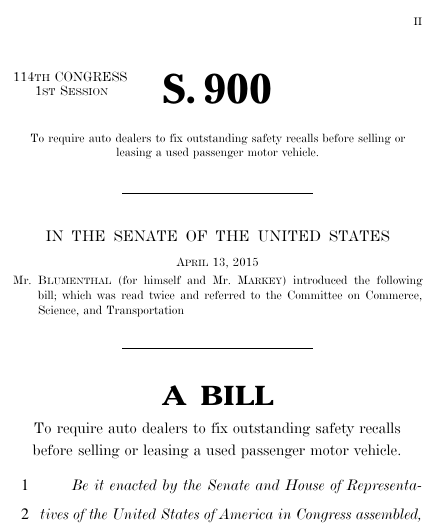 This bill was introduced on April 13, 2015, in a previous session of Congress, but it did not receive a vote.

Bills numbers restart every two years. That means there are other bills with the number S. 900. This is the one from the 114th Congress.