S.Con.Res. 47 (114th): A concurrent resolution expressing support for fostering closer economic and commercial ties between the United States and the United Kingdom following the decision of the people of the United Kingdom to withdraw from the European Union. 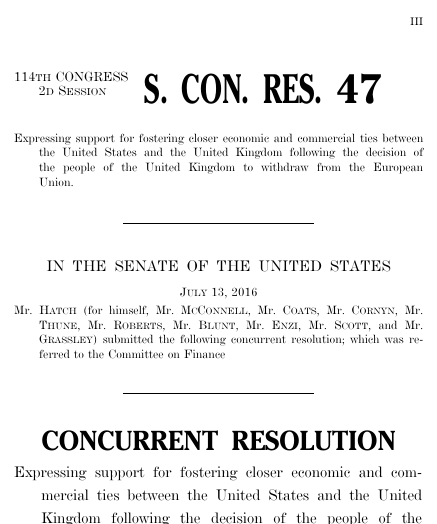 S.Con.Res. 47 (114th) was a concurrent resolution in the United States Congress.

Resolutions numbers restart every two years. That means there are other resolutions with the number S.Con.Res. 47. This is the one from the 114th Congress.

A concurrent resolution expressing support for fostering closer economic and commercial ties between the United States and the United Kingdom following the decision of the people of the United Kingdom to withdraw from the European Union, S. Con. Res. 47, 114th Cong. (2016).