S.Con.Res. 56 (114th): A concurrent resolution clarifying any potential misunderstanding as to whether actions taken by President-elect Donald Trump constitute a violation of the Emoluments Clause, and calling on President-elect Trump to divest his interest in, and sever his relationship to, the Trump Organization. 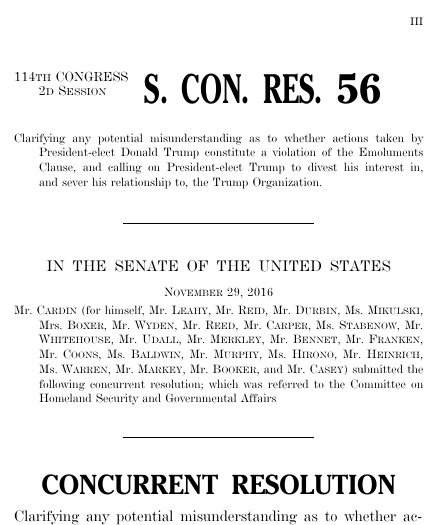 This resolution was introduced on November 29, 2016, in a previous session of Congress, but was not enacted.

S.Con.Res. 56 (114th) was a concurrent resolution in the United States Congress.

Resolutions numbers restart every two years. That means there are other resolutions with the number S.Con.Res. 56. This is the one from the 114th Congress.

GovTrack.us. (2020). S.Con.Res. 56 — 114th Congress: A concurrent resolution clarifying any potential misunderstanding as to whether actions taken by President-elect Donald ... Retrieved from https://www.govtrack.us/congress/bills/114/sconres56

A concurrent resolution clarifying any potential misunderstanding as to whether actions taken by President-elect Donald Trump constitute a violation of the Emoluments Clause, and calling on President-elect Trump to divest his interest in, and sever his relationship to, the Trump Organization, S. Con. Res. 56, 114th Cong. (2016).