S.J.Res. 20 (114th): A joint resolution relating to the approval of the proposed Agreement for Cooperation Between the United States of America and the Government of the Republic of Korea Concerning Peaceful Uses of Nuclear Energy. 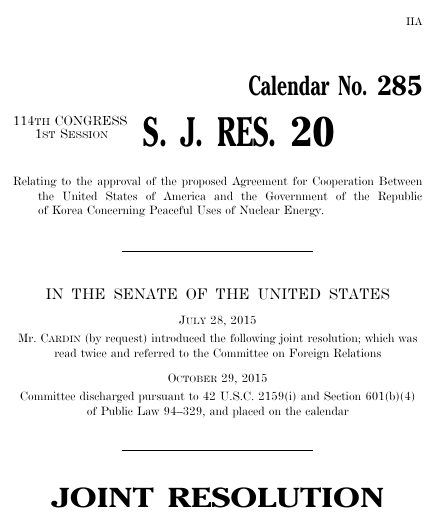 This resolution was introduced on October 29, 2015, in a previous session of Congress, but it did not receive a vote.

Resolutions numbers restart every two years. That means there are other resolutions with the number S.J.Res. 20. This is the one from the 114th Congress.

This joint resolution was introduced in the 114th Congress, which met from Jan 6, 2015 to Jan 3, 2017. Legislation not enacted by the end of a Congress is cleared from the books.

GovTrack.us. (2020). S.J.Res. 20 — 114th Congress: A joint resolution relating to the approval of the proposed Agreement for Cooperation Between the ... Retrieved from https://www.govtrack.us/congress/bills/114/sjres20

A joint resolution relating to the approval of the proposed Agreement for Cooperation Between the United States of America and the Government of the Republic of Korea Concerning Peaceful Uses of Nuclear Energy, S.J. Res. 20, 114th Cong. (2015).