S.J.Res. 25 (114th): A joint resolution providing for congressional disapproval under chapter 8 of title 5, United States Code, of the final rule of the Administrator of the Environmental Protection Agency relating to “National Ambient Air Quality Standards for Ozone”. 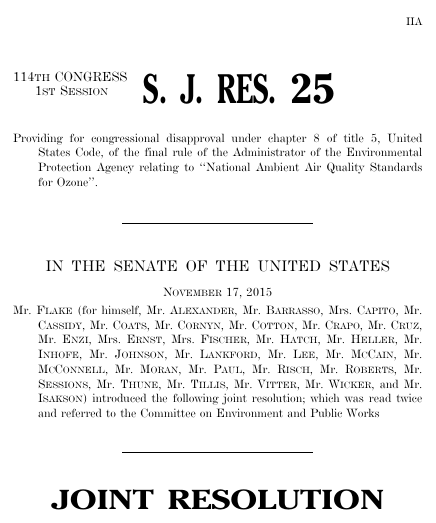 This resolution was introduced on November 17, 2015, in a previous session of Congress, but it did not receive a vote.

Resolutions numbers restart every two years. That means there are other resolutions with the number S.J.Res. 25. This is the one from the 114th Congress.

A joint resolution providing for congressional disapproval under chapter 8 of title 5, United States Code, of the final rule of the Administrator of the Environmental Protection Agency relating to “National Ambient Air Quality Standards for Ozone”, S.J. Res. 25, 114th Cong. (2015).