S.Res. 104 (114th): A resolution to express the sense of the Senate regarding the success of Operation Streamline and the importance of prosecuting first time illegal border crossers. 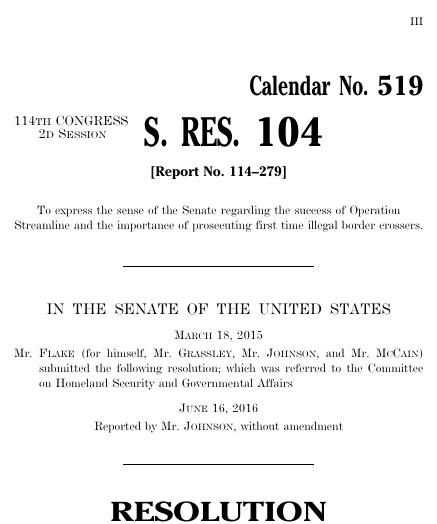 This resolution was introduced on February 10, 2016, in a previous session of Congress, but it did not receive a vote.

Resolutions numbers restart every two years. That means there are other resolutions with the number S.Res. 104. This is the one from the 114th Congress.

GovTrack.us. (2021). S.Res. 104 — 114th Congress: A resolution to express the sense of the Senate regarding the success of Operation Streamline …. Retrieved from https://www.govtrack.us/congress/bills/114/sres104

A resolution to express the sense of the Senate regarding the success of Operation Streamline and the importance of prosecuting first time illegal border crossers, S. Res. 104, 114th Cong. (2015).