S.Res. 113 (114th): A resolution expressing the sense of the Senate that the Citizens’ Stamp Advisory Committee should recommend the issuance of, and the United States Postal Service should issue, a commemorative stamp in honor of the holiday of Diwali. 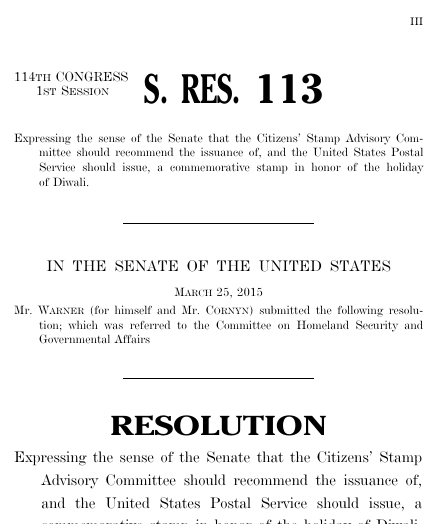 This resolution was introduced on March 25, 2015, in a previous session of Congress, but it did not receive a vote.

Resolutions numbers restart every two years. That means there are other resolutions with the number S.Res. 113. This is the one from the 114th Congress.

GovTrack.us. (2021). S.Res. 113 — 114th Congress: A resolution expressing the sense of the Senate that the Citizens’ Stamp Advisory Committee should ... Retrieved from https://www.govtrack.us/congress/bills/114/sres113

A resolution expressing the sense of the Senate that the Citizens’ Stamp Advisory Committee should recommend the issuance of, and the United States Postal Service should issue, a commemorative stamp in honor of the holiday of Diwali, S. Res. 113, 114th Cong. (2015).