S.Res. 166 (114th): A resolution expressing the sense of the Senate that domestically grown flowers support the farmers, small businesses, jobs, and economy of the United States, enhance the ability of the people of the United States to honor their mothers on Mother’s Day, and that the White House should strive to showcase domestically grown flowers. 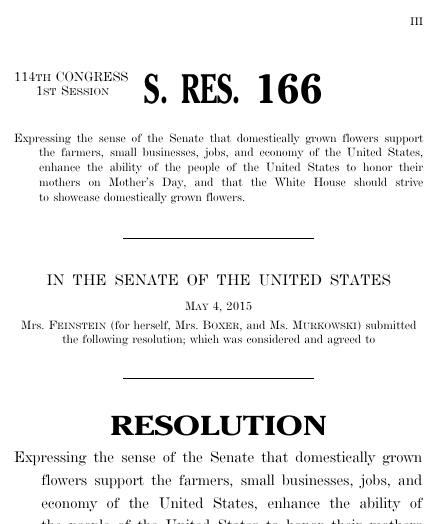 Resolutions numbers restart every two years. That means there are other resolutions with the number S.Res. 166. This is the one from the 114th Congress.

GovTrack.us. (2021). S.Res. 166 — 114th Congress: A resolution expressing the sense of the Senate that domestically grown flowers support the farmers, ... Retrieved from https://www.govtrack.us/congress/bills/114/sres166