S.Res. 193 (114th): A resolution celebrating the 50th anniversary of the historic Griswold v. Connecticut decision of the Supreme Court of the United States and expressing the sense of the Senate that the case was an important step forward in helping ensure that all people of the United States are able to use contraceptives to plan pregnancies and have healthier babies. 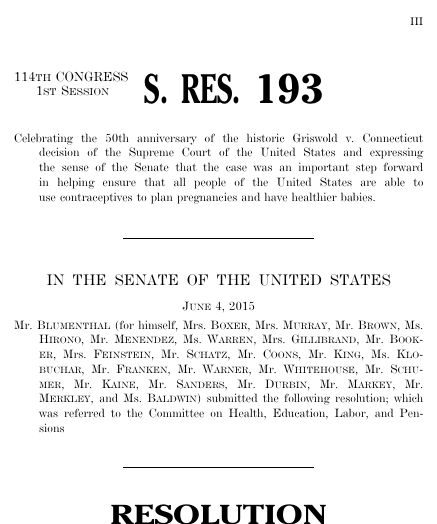 This resolution was introduced on June 4, 2015, in a previous session of Congress, but it did not receive a vote.

Resolutions numbers restart every two years. That means there are other resolutions with the number S.Res. 193. This is the one from the 114th Congress.

GovTrack.us. (2022). S.Res. 193 — 114th Congress: A resolution celebrating the 50th anniversary of the historic Griswold v. Connecticut decision of the …. Retrieved from https://www.govtrack.us/congress/bills/114/sres193

A resolution celebrating the 50th anniversary of the historic Griswold v. Connecticut decision of the Supreme Court of the United States and expressing the sense of the Senate that the case was an important step forward in helping ensure that all people of the United States are able to use contraceptives to plan pregnancies and have healthier babies, S. Res. 193, 114th Cong. (2015).