S.Res. 29 (114th): A resolution condemning the terrorist attacks in Paris, offering condolences to the families of the victims, expressing solidarity with the people of France, and reaffirming fundamental freedom of expression. 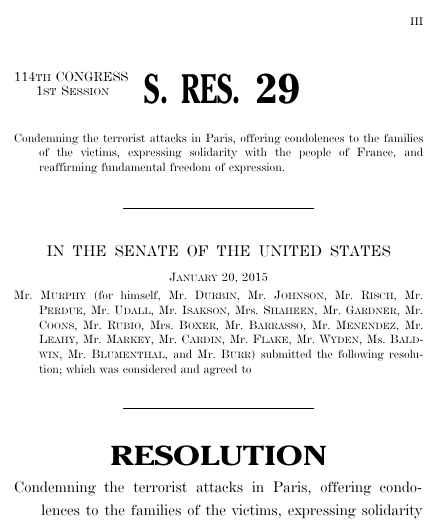 S.Res. 29 (114th) was a simple resolution in the United States Congress.

Resolutions numbers restart every two years. That means there are other resolutions with the number S.Res. 29. This is the one from the 114th Congress.

GovTrack.us. (2022). S.Res. 29 — 114th Congress: A resolution condemning the terrorist attacks in Paris, offering condolences to the families of the …. Retrieved from https://www.govtrack.us/congress/bills/114/sres29

A resolution condemning the terrorist attacks in Paris, offering condolences to the families of the victims, expressing solidarity with the people of France, and reaffirming fundamental freedom of expression, S. Res. 29, 114th Cong. (2015).