S.Res. 299 (114th): A resolution honoring the life, legacy, and example of former Israeli Prime Minister Yitzhak Rabin on the twentieth anniversary of his death. 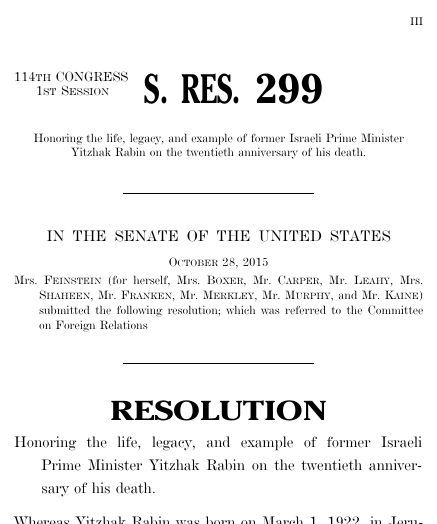 This resolution was introduced on October 28, 2015, in a previous session of Congress, but it did not receive a vote.

Resolutions numbers restart every two years. That means there are other resolutions with the number S.Res. 299. This is the one from the 114th Congress.

A resolution honoring the life, legacy, and example of former Israeli Prime Minister Yitzhak Rabin on the twentieth anniversary of his death, S. Res. 299, 114th Cong. (2015).