S.Res. 335 (114th): A resolution supporting the goals and ideals of National Aviation Maintenance Technician Day, honoring the invaluable contributions of Charles Edward Taylor, regarded as the father of aviation maintenance, and recognizing the essential role of aviation maintenance technicians in ensuring the safety and security of civil and military aircraft. 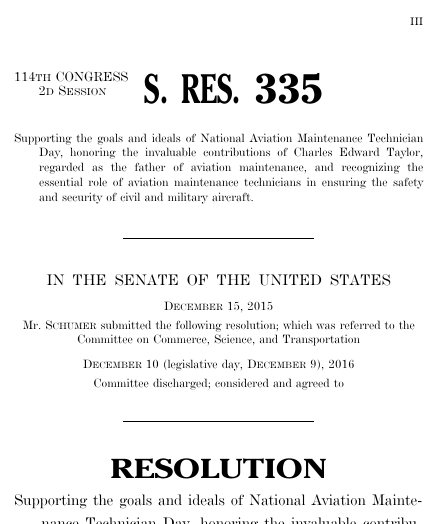 Resolutions numbers restart every two years. That means there are other resolutions with the number S.Res. 335. This is the one from the 114th Congress.

A resolution supporting the goals and ideals of National Aviation Maintenance Technician Day, honoring the invaluable contributions of Charles Edward Taylor, regarded as the father of aviation maintenance, and recognizing the essential role of aviation maintenance technicians in ensuring the safety and security of civil and military aircraft, S. Res. 335, 114th Cong. (2015).