S.Res. 340 (114th): A resolution expressing the sense of the Senate that the atrocities perpetrated by the Islamic State of Iraq and the Levant (ISIL) against religious and ethnic minorities in Iraq and Syria include war crimes, crimes against humanity, and genocide. 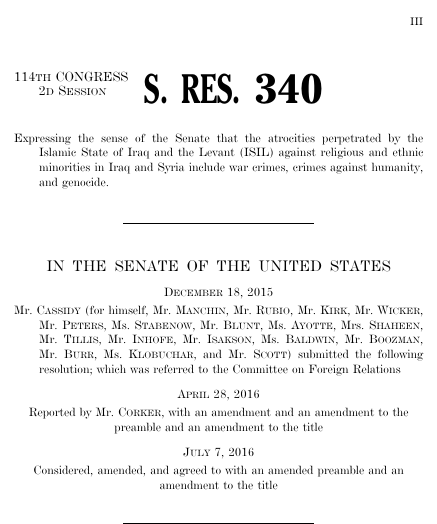 Resolutions numbers restart every two years. That means there are other resolutions with the number S.Res. 340. This is the one from the 114th Congress.

GovTrack.us. (2022). S.Res. 340 — 114th Congress: A resolution expressing the sense of the Senate that the atrocities perpetrated by the Islamic …. Retrieved from https://www.govtrack.us/congress/bills/114/sres340

A resolution expressing the sense of the Senate that the atrocities perpetrated by the Islamic State of Iraq and the Levant (ISIL) against religious and ethnic minorities in Iraq and Syria include war crimes, crimes against humanity, and genocide, S. Res. 340, 114th Cong. (2015).