S.Res. 368 (114th): A resolution supporting efforts by the Government of Colombia to pursue peace and the end of the country’s enduring internal armed conflict and recognizing United States support for Colombia at the 15th anniversary of Plan Colombia. 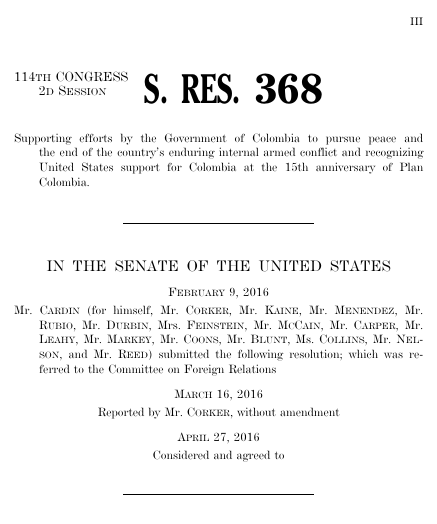 Resolutions numbers restart every two years. That means there are other resolutions with the number S.Res. 368. This is the one from the 114th Congress.

GovTrack.us. (2020). S.Res. 368 — 114th Congress: A resolution supporting efforts by the Government of Colombia to pursue peace and the end ... Retrieved from https://www.govtrack.us/congress/bills/114/sres368

A resolution supporting efforts by the Government of Colombia to pursue peace and the end of the country’s enduring internal armed conflict and recognizing United States support for Colombia at the 15th anniversary of Plan Colombia, S. Res. 368, 114th Cong. (2016).