S.Res. 386 (114th): A resolution expressing the sense of the Senate that the United States should establish a goal of more than 50 percent clean and carbon-free electricity by 2030 to avoid the worst impacts of climate change, grow the economy, increase shared prosperity, improve public health, and preserve the national security of the United States. 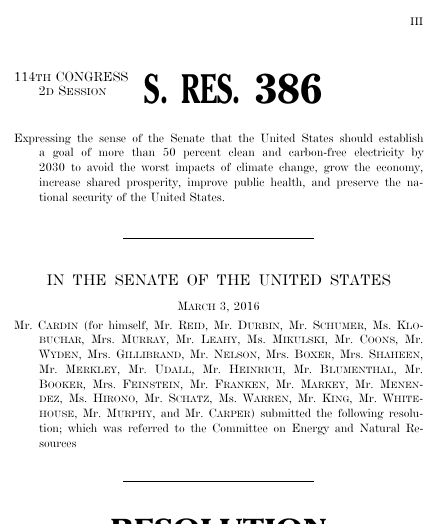 This resolution was introduced on March 3, 2016, in a previous session of Congress, but it did not receive a vote.

Resolutions numbers restart every two years. That means there are other resolutions with the number S.Res. 386. This is the one from the 114th Congress.

GovTrack.us. (2020). S.Res. 386 — 114th Congress: A resolution expressing the sense of the Senate that the United States should establish a ... Retrieved from https://www.govtrack.us/congress/bills/114/sres386

A resolution expressing the sense of the Senate that the United States should establish a goal of more than 50 percent clean and carbon-free electricity by 2030 to avoid the worst impacts of climate change, grow the economy, increase shared prosperity, improve public health, and preserve the national security of the United States, S. Res. 386, 114th Cong. (2016).