S.Res. 477 (114th): A resolution promoting minority health awareness and supporting the goals and ideals of National Minority Health Month in April 2016, which include bringing attention to the health disparities faced by minority populations of the United States such as American Indians, Alaskan Natives, Asian Americans, African Americans, Latino Americans, and Native Hawaiians or other Pacific Islanders. 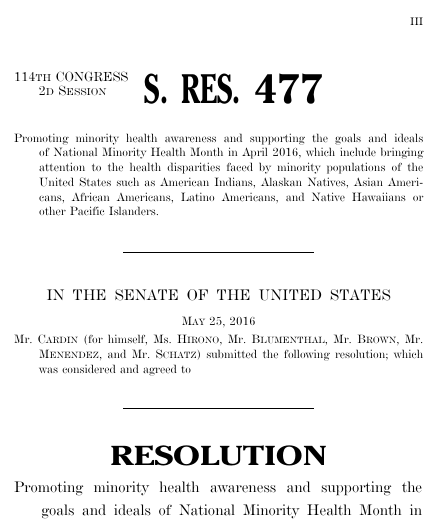 Resolutions numbers restart every two years. That means there are other resolutions with the number S.Res. 477. This is the one from the 114th Congress.

A resolution promoting minority health awareness and supporting the goals and ideals of National Minority Health Month in April 2016, which include bringing attention to the health disparities faced by minority populations of the United States such as American Indians, Alaskan Natives, Asian Americans, African Americans, Latino Americans, and Native Hawaiians or other Pacific Islanders, S. Res. 477, 114th Cong. (2016).