S.Res. 485 (114th): A resolution urging the Government of the Democratic Republic of the Congo to comply with constitutional limits on presidential terms and fulfill its constitutional mandate for a democratic transition of power in 2016. 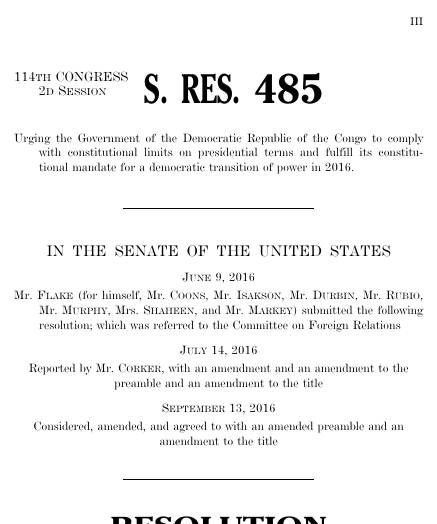 Resolutions numbers restart every two years. That means there are other resolutions with the number S.Res. 485. This is the one from the 114th Congress.

GovTrack.us. (2021). S.Res. 485 — 114th Congress: A resolution urging the Government of the Democratic Republic of the Congo to comply with …. Retrieved from https://www.govtrack.us/congress/bills/114/sres485

A resolution urging the Government of the Democratic Republic of the Congo to comply with constitutional limits on presidential terms and fulfill its constitutional mandate for a democratic transition of power in 2016, S. Res. 485, 114th Cong. (2016).