S.Res. 488 (114th): A resolution recognizing the historical significance and the 50th anniversary of the “James H. Meredith March Against Fear”, a 220-mile walk down Highway 51 from Memphis, Tennessee, to Jackson, Mississippi. 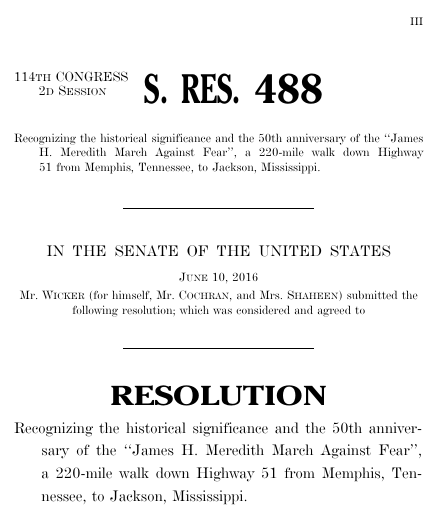 Resolutions numbers restart every two years. That means there are other resolutions with the number S.Res. 488. This is the one from the 114th Congress.

GovTrack.us. (2020). S.Res. 488 — 114th Congress: A resolution recognizing the historical significance and the 50th anniversary of the “James H. Meredith ... Retrieved from https://www.govtrack.us/congress/bills/114/sres488

A resolution recognizing the historical significance and the 50th anniversary of the “James H. Meredith March Against Fear”, a 220-mile walk down Highway 51 from Memphis, Tennessee, to Jackson, Mississippi, S. Res. 488, 114th Cong. (2016).