S.Res. 622 (114th): A resolution expressing support for the goals of National Adoption Day and National Adoption Month by promoting national awareness of adoption and the children awaiting families, celebrating children and families involved in adoption, and encouraging the people of the United States to secure safety, permanency, and well-being, for all children. 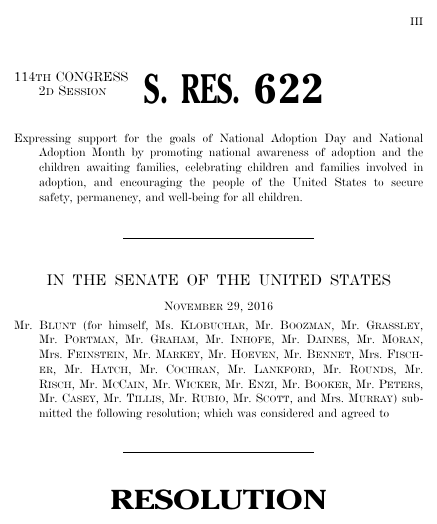 Resolutions numbers restart every two years. That means there are other resolutions with the number S.Res. 622. This is the one from the 114th Congress.

A resolution expressing support for the goals of National Adoption Day and National Adoption Month by promoting national awareness of adoption and the children awaiting families, celebrating children and families involved in adoption, and encouraging the people of the United States to secure safety, permanency, and well-being, for all children, S. Res. 622, 114th Cong. (2016).