S.Res. 65 (114th): A resolution supporting efforts to bring an end to violence perpetrated by Boko Haram, and urging the Government of Nigeria to conduct transparent, peaceful, and credible elections. 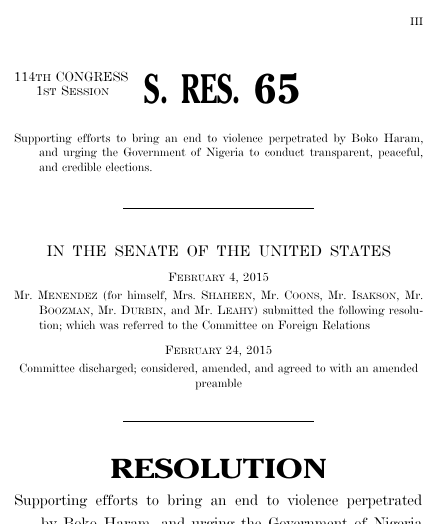 S.Res. 65 (114th) was a simple resolution in the United States Congress.

Resolutions numbers restart every two years. That means there are other resolutions with the number S.Res. 65. This is the one from the 114th Congress.

GovTrack.us. (2022). S.Res. 65 — 114th Congress: A resolution supporting efforts to bring an end to violence perpetrated by Boko Haram, and …. Retrieved from https://www.govtrack.us/congress/bills/114/sres65

A resolution supporting efforts to bring an end to violence perpetrated by Boko Haram, and urging the Government of Nigeria to conduct transparent, peaceful, and credible elections, S. Res. 65, 114th Cong. (2015).