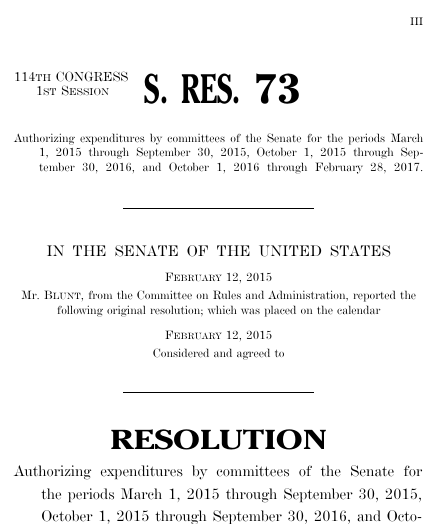 “Sasse and Johnson Demand Answers from Health and Human Services over Failure to Return Payments to Taxpayers”
— Sen. Benjamin Sasse [R-NE] on Jul 28, 2016

S.Res. 73 (114th) was a simple resolution in the United States Congress.

Resolutions numbers restart every two years. That means there are other resolutions with the number S.Res. 73. This is the one from the 114th Congress.

GovTrack.us. (2020). S.Res. 73 — 114th Congress: An original resolution authorizing expenditures by committees of the Senate for the periods March 1, ... Retrieved from https://www.govtrack.us/congress/bills/114/sres73