To amend the Public Health Service Act to authorize the expansion of activities related to Alzheimer's disease, cognitive decline, and brain health under the Alzheimer's Disease and Healthy Aging Program, and for other purposes. 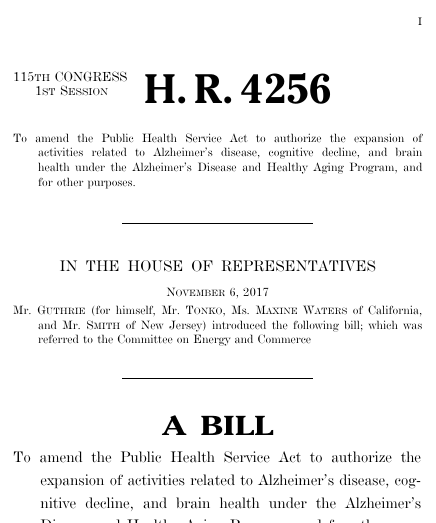 Alzheimer's Impact Movement On behalf of the Alzheimer’s Association and the Alzheimer’s Impact Movement (AIM), including our nationwide networks of advocates, thank you for your continued leadership on issues and legislation important to Americans with Alzheimer’s and other dementias, and to their caregivers. The ...
Your organization’s position statement could be on this page! Register your organization’s position on this bill »

Bills numbers restart every two years. That means there are other bills with the number H.R. 4256. This is the one from the 115th Congress.

This position statement was submitted by Alzheimer's Impact Movement on Oct 14, 2018.

As scientists continue to search for a way to prevent, cure, or slow the progression of Alzheimer’s through medical research, public health plays an important role in promoting cognitive function and reducing the risk of cognitive decline. Investing in a nationwide Alzheimer’s public health response will help create population-level change, achieve a higher quality of life for those living with the disease and their caregivers, and reduce associated costs. The BOLD Infrastructure for Alzheimer’s Act would provide this crucial investment by establishing Alzheimer’s centers of excellence across the country and funding state, local and tribal public health departments to increase early detection and diagnosis, reduce risk, prevent avoidable hospitalizations, reduce health disparities, support the needs of caregivers and support care planning for people living with the disease. These important public health actions allow individuals with Alzheimer’s to live in their homes longer and delay costly institutionalized care. These goals are consistent with the National Plan to Address Alzheimer’s Disease, which includes a strategy to “work with state, tribal, and local governments to improve coordination and identify model initiatives to advance Alzheimer’s disease and related dementias awareness and readiness across the government.”

The BOLD Infrastructure for Alzheimer’s Act would also increase the collection, analysis and timely reporting of Alzheimer’s data. This data is critical to identifying opportunities for public health interventions, helping stakeholders track progress in the public health response, and enabling state and federal policymakers to make informed decisions when developing plans and policies. Finally, the bill would also strengthen implementation of the Center for Disease Control and Prevention’s Public Health Road Map, which includes strategic action items for state and local public health departments and their partners to promote cognitive functioning, address cognitive impairment and help meet the needs of care partners.