To prevent international violence against women, and for other purposes. 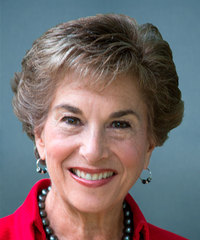 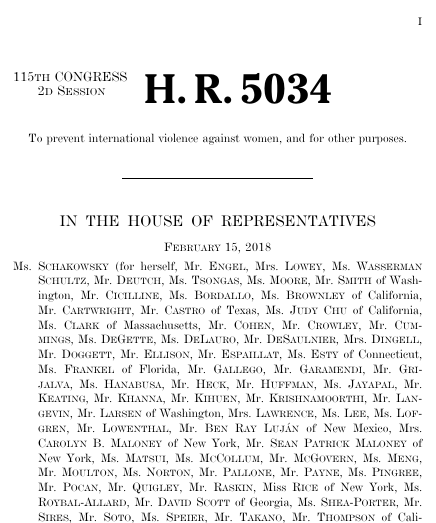 This bill was introduced on February 15, 2018, in a previous session of Congress, but it did not receive a vote.

Darfur Women Action Group DWAG supports legislation which brings attention to and seeks to end violence against women, especially in cases where such violence is used as part of a deliberate campaign as a weapon of war. This bill goes a long way towards tackling ...
Your organization’s position statement could be on this page! Register your organization’s position on this bill »

Bills numbers restart every two years. That means there are other bills with the number H.R. 5034. This is the one from the 115th Congress.

This position statement was submitted by Darfur Women Action Group on May 1, 2018.

DWAG supports legislation which brings attention to and seeks to end violence against women, especially in cases where such violence is used as part of a deliberate campaign as a weapon of war. This bill goes a long way towards tackling those goals, and insofar as it does DWAG is in full support.

However, this bill does not go far enough, and in fact includes glaring and irresponsible omissions of previously acknowledged fact. Section 2, Clause 14 explicitly mentions six states where “rape and sexual assault are used as tools of war in conflict zones,” namely, “the Democratic Republic of the Congo, Iraq, Syria, Afghanistan, Colombia, and South Sudan.” The Congress is right to call attention to and condemn sexual violence in these crisis zones. Our position is that Sudan should be added to this list.

The United States has acknowledged that Sudan’s is a genocidal regime. The International Criminal Court has indicted President al-Bashir for genocide, war crimes, and crimes against humanity. The genocide in Darfur is still ongoing, and sexual violence continues to be used as a weapon within this genocidal campaign. There is a clear pattern of instances of sexual violence occurring in tandem with other acts of physical violence, perpetrated by Government or Government-backed forces, with no accountability for perpetrators. The omission of Sudan from the list of states singled out as areas where rape and sexual assault are used as weapons of war is particularly distressing given recent US moves towards normalization of relations with Sudan. Congress must continue to exert pressure on the genocidal regime in Khartoum.

DWAG proposes that Section 2. Clause 14 be amended to include reference to Sudan as a state where rape and sexual assault are used as tools of war.