A bill to provide for the administration of certain national monuments, to establish a National Monument Enhancement Fund, and to establish certain wilderness areas in the States of New Mexico and Nevada. 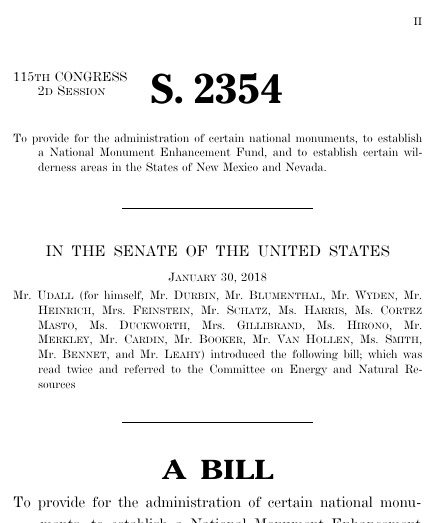 This bill was introduced on January 30, 2018, in a previous session of Congress, but was not enacted.

This position statement was submitted by Forests Forever on Jun 7, 2018.

We thank the co-sponsors of S.B. 2354 – the Antiquities Act of 2018 – and to urge them to actively work to pass this critical legislation.

The current administration – in its attempts to undo two million acres of national monument protections and open up our public lands to extractive industries such as logging, mining and fossil fuels – has demonstrated total disregard for the views and wishes of the American people.

Presidents since 1906 have used the Antiquities Act to designate monuments of enormous value and popularity. These iconic and historical places are not only our heritage but also provide a myriad of benefits ranging from enhanced water quality, biodiversity conservation and assistance in combatting climate change, to driving local economic growth.

By officially declaring Congress' support for the 51 national monuments established under the Antiquities Act – by presidents of both parties – between 1996 and 2017, S.B. 2354 affirms the views of the broad Americans public. Last year they sent in more than 2.8 million comments in support of protecting our national monuments.

The bill reinforces and clarifies that presidential proclamations designating national monuments are valid and the monuments cannot be reduced or diminished except by an act of Congress.

National monument designations are the product of years – and often decades – of study, planning, and stakeholder input in which thousands of voices are heard and considered. We must insure that these national treasures can never again be jeopardized by one hostile presidential administration.

S.B. 2354 would further enhance protections for national monuments by: 1) requiring that they be surveyed and mapped and that management plans be completed in two years, in the same manner as congressionally designated national monuments, and 2) ensuring that they receive additional resources so they continue to meet their full potential of providing unmatched economic, recreational, and cultural benefits to their states and to the nation.

We urge you to protect the status of our monuments by working to pass S.B. 2354 so they may remain open and unspoiled for generations to come.