A bill to improve postal operations, service, and transparency. 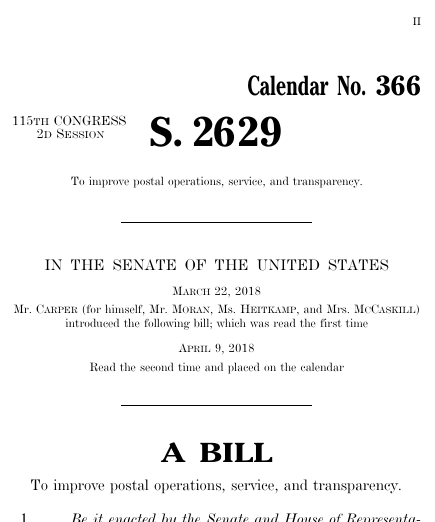 This bill was introduced on April 9, 2018, in a previous session of Congress, but it did not receive a vote.

United Postmasters and Managers of America On March 22, 2018, Senators Tom Carper (D-DE), Jerry Moran (R-KS), Heidi Heitkamp (D-ND) and Claire McCaskill (D-MO) introduced S. 2629, the Postal Reform Act of 2018. The bill would integrate FEHBP and Medicare coverage for Medicare-eligible postal retirees in order ...
Your organization’s position statement could be on this page! Register your organization’s position on this bill »

Bills numbers restart every two years. That means there are other bills with the number S. 2629. This is the one from the 115th Congress.

United Postmasters and Managers of America supports this bill

This position statement was submitted by United Postmasters and Managers of America on Mar 29, 2018.

The bill calls for a more accurate calculation of the USPS' pension liability. In addition, it would amortize USPS' remaining health care liability; 80 percent over the next 40 years; the remaining 20 percent would be secured with future postal property sales.

S. 2629 would establish a procedure for the USPS to seek waivers from its annual amortization payment through the Postal Regulatory Commission. The Senate bill would also offset the increased Medicare obligation through a one-time $13 billion transfer of funds from the account in which amortization payments have been deposited in the past to the Medicare Trust Fund.

S. 2629 would reduce the number of presidential-nominated Board of Governors from nine to five, would make the Postal Inspector General (IG) a presidential appointee, would create a Chief Innovation Officer within the USPS, and would reform the way in which the USPS awards vendor contracts.

It would restore one-half of the exigent rate increase that expired in April 2016. S. 2629 would also require the Postal IG to conduct a study relating to the rates charged to "underwater" postal products (i.e., magazines), and would require the USPS to submit to Congress a plan for its long-term solvency.

S. 2629 would permit the shipping of wine, beer and spirits.

Upon introduction of S. 2629, UPMA Co-Presidents Tony Leonardi and Sean Acord commented: "The United Postmasters and Managers of America (UPMA) applauds the efforts of Senators Carper, Moran, Heitkamp and McCaskill in introducing bipartisan legislation to further the goal of providing financial relief to the U.S Postal Service. UPMA looks forward to continue working with these Senators and other members of Congress to sustain the U.S. Postal Service, a proven national treasure.”