A bill to authorize the Secretary of Education to establish an Advisory Commission on Serving and Supporting Students with Mental Health Disabilities in Institutions of Higher Education, and for other purposes. 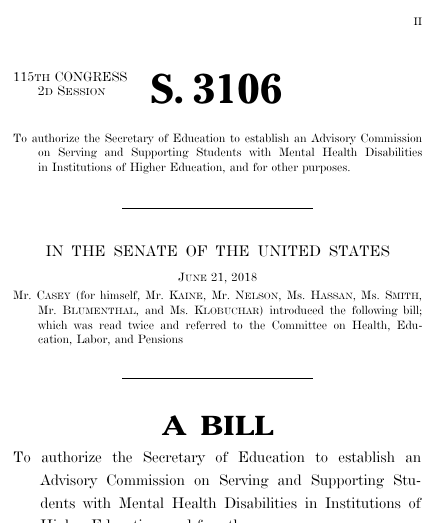 This bill was introduced on June 21, 2018, in a previous session of Congress, but was not enacted.

This position statement was submitted by STUDENT MENTAL HEALTH POLICY ALLIANCE on Aug 13, 2018.

On June 23, 2018 The Student Mental Health Policy Alliance voted to support a Senate Bill by Bob Casey(D PA) aimed toward improving access to mental health services for students at college campuses across America. The Higher Education Mental Health Commission Act would establish a national commission focused on mental health conditions facing students at colleges and universities across the country.

Between 2010 and 2015, enrollment in colleges and universities increased by only 5 percent, yet the number of students using mental health services increased by 30 to 40 percent. Students seeking help are increasingly likely to have attempted suicide or engaged in self-harm, the same study found. More than 50 percent of students between the ages of 18 and 24 reported having a severe psychological problem or experiencing feelings of hopelessness. This bill would help address the lack of resources to support students with mental health issues.

Highly publicized campus suicides and research showing an alarming prevalence of mental illness on campuses have heightened the sense of urgency. The reality of rampant mental illness on campus shatters the notion of college as a carefree time when the biggest worries are passing finals and finding a date. For many students, dark shadows shroud the sheltered nest of academe.

More than 40 percent of US students become so depressed during their four years in college that they have trouble functioning, while 15 percent suffer clinical depression, according to a 2004 survey of 47,202 students by the American College Health Association. Suicide remains the second-leading cause of death among college students, claiming about 1,100 lives a year.

“Today, campuses are plagued with an unprecedented demand for counseling services,” said Jacob Griffin, a former on-campus advocate—disturbed by campus administrators’ lack of responsiveness in addressing these issues; pivotal to student success and retention. “It is not uncommon for a university counseling center to have a 6 to 8 week wait…with mental health—symptoms intensify quickly,” Griffin continued.

Jacob launched a national non-profit in 2016 strategically focused on helping campus counseling centers address the influx by lobbying campus leaders to increase staffing and budgetary allotments. He has said that budgets in nearly 95% of Public University centers’ in the past 10 years have not changed to match increases in enrollment numbers, let alone the increases in demand. His research has found 7 out of 10 Campus Counseling Center Directors have resigned or retired within the last several years; citing lack of administrative support and over-extension of resources as key factors.

Specialists in the field have long known that the onset of mental illness often comes during adolescence or early adulthood. Living away from home, often for the first time, compounds stress and anxiety. So, too, does pressure to succeed in an increasingly competitive climate on campus.

As the stigma of having a diagnosed mental illness subsides, demand for counseling will presumably continue to rise. Criticizing Millennials as seemingly less resilient is the most popular diatribe, but it shouldn’t be, Griffin emphasized. In fact, it undermines a decade’s worth of work by counselors, psychologists, and student advocates who have strived to not only bring mental health to the forefront of discussion, but to reassure students that there is no shame in struggling—that experiencing mental distress is actually common and not a sign of weakness. “The distinct proof of concept and need,” Griffin said, “is what compels me to continue to advocate: the fact that I’ve had boots-on-the-ground experience…having witnessed and experienced the adversity has led me to continue bringing awareness to these issues” The result of normalizing mental health in higher education is that peers, faculty and bystanders, have intentionally led sufferers to the centers that promise to help them. “There is absolutely,” Griffin, “a lack of follow-through on that commitment.”

A subsidiary of the 501c3 charity: Griffin Ambitions Limited, The nations leading voice on increasing campus mental health services too improve the lives of millions of Students affected by mental illness. We are committed to advocating for campus support, while reviewing and improving current trends in college mental health and highlighting promising practices that contribute to student success. We employ various strategic approaches too improve mental wellbeing on campuses. We take an active role in identifying initiatives consistent with our priorities, seeking out Higher Education Institutions’ that can advance these initiatives and work alongside administrators and stakeholders. We aim to effect change at grassroots and systemic levels. Since Founder Jacob Griffin’s mental health advocacy beyond his campus began in 2015, we have distinctly established ourselves through dedication, commitment and an unceasing belief in our mission to strengthen and improve how college Counseling Centers address their influx. Through our united support for education, advocacy and awareness efforts, the Student Mental Health Policy Alliance is at the forefront of increasing campus provisions, and is a distinctly recognized force in urging new ideas and solutions to improve educational outcomes.