Prior to becoming the vehicle for passage of criminal justice reform, this bill was the Save Our Seas Act of 2018.

This bill was enacted after being signed by the President on December 21, 2018.

Dan Sullivan was the sponsor of this bill when it was introduced on Mar 29, 2017, but the bill’s text was subsequently replaced with unrelated provisions. 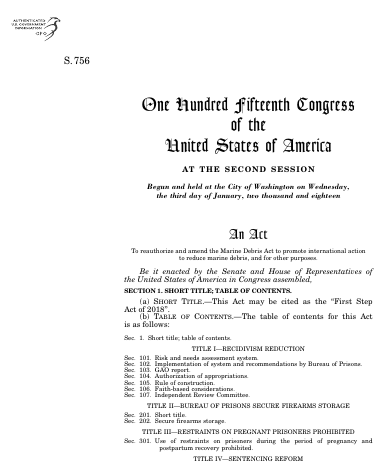 Bills numbers restart every two years. That means there are other bills with the number S. 756. This is the one from the 115th Congress.

This position statement was submitted by FedCURE on Dec 23, 2018.

In studying S.756 we find, as do fellow advocates, the bill does not go far enough on sentencing reforms. To that end, FedCURE and 47,450+ BARBER AMENDMENT supporters on CHANGE.org, strongly urge the President and Congress to include the BARBER AMENDMENT in the First Step Act. Thereby, increasing good time allowances from 54 to 128 days per year and safely reduce the federal inmate population by half by 2021.

There are many provisions of S.3649 that we do and can support, but there’s an awful lot of wishful thinking and some provisions of particular concern.

For example, the constitutionality of the First Step Act 0f 2018 (S.756), TITLE I—Recidivism reduction, SEC. 101. RISK AND NEEDS ASSESSMENT SYSTEM, et. seq. Whereas, the section means to amend, in part, Chapter 229 of title 18 USC, to wit: Title 18 USC 3632 - Development of risk and needs assessment system., (4) TIME CREDITS. Aside from creating a nightmare and legislative quagmire for the Federal Bureau of Prisons to administer, the statute would without due process of law create classes of eligible and ineligible inmates and discriminate among the classes, albeit similarly situated at sentencing, in a manner that is arbitrary, capricious and fundamentally unfair in violation of equal protection. Fifth and Fourteenth Amendments to the United States Constitution.

The final draft of the legislation has yet to be released, although its main backers have been pledging for days to unveil it imminently. Sen. Grassley said Tuesday morning that the changes were largely mechanical and that negotiations over the substance were largely done.

To be sure, most agree that S.756 does not go far enough, some may say to far, but it is a start and we have to start somewhere. This is as good of place as any. We look forward to working with the 116th Congress on amendments.

This position statement was submitted by R Street Institute on Oct 18, 2018.

SpendingTracker.org estimates S. 756 will add $46 million in new spending through 2022.