To protect the voting rights of Native American and Alaska Native voters. 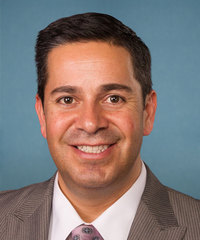 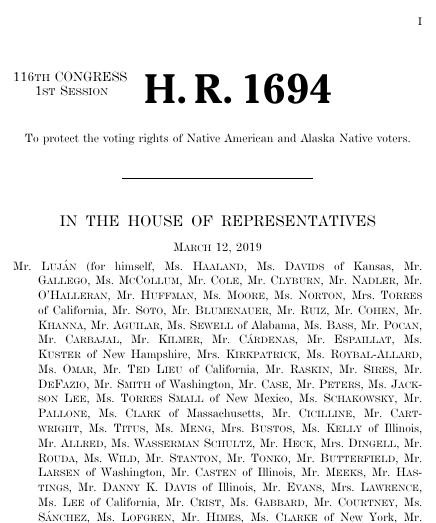 This bill was introduced on March 12, 2019, in a previous session of Congress, but it did not receive a vote.

Bills numbers restart every two years. That means there are other bills with the number H.R. 1694. This is the one from the 116th Congress.

This position statement was submitted by SPEAK on Jul 4, 2020.

We are an organization whose mission is to support youth in empowering their voices for civic participation with the hope to create an equitable, survivable, and thrive-able future for all life. We see the right to vote as one aspect of a civic voice. On this 4th of July 2020, we wish to declare our support for the H.R.1694 - Native American Voting Rights Act of 2019. In every corner of this society, Native peoples are denied participation in the very institutions purported to serve democracy. In 2008, the Alaskan government eliminated polling locations for Alaska Native villages as part of a “district realignment” that resulted in voters having to travel by plane in order to vote. In the Southwest, where large populations of American Indians live, Non-Hispanic whites are 350 percent more likely to have mail delivered to their homes than Native Americans. In 2016, the Pyramid Lake and Walker River Paiute Tribes in Nevada filed a lawsuit prior to the general election in order to get polling locations on the reservation. Also in 2016, San Juan County in Utah switched to a mail-only voting system and offered in-person early voting only in the majority white part of the county. In response, the Navajo Nation sued to ensure in-person locations and compliance with the language assistance requirements under Section 203 of the Voting Rights Act. For the Kaibab Paiute Tribe in Arizona, in 2016 and 2018, voters had to travel 280 miles one-way to vote early in person. When Pima County closed early voting on the Pascua Yaqui Reservation in 2018, tribal members reported that they had to travel over two hours on public transportation to reach the nearest polling location. These examples demonstrate the extreme distances Native voters must travel and the obstacles they must overcome in order to exercise their constitutional rights to vote (​How the Native American Vote Continues to be Suppressed,​ ​ Patty Ferguson-Bohnee, Human Rights American Bar Association, February 2020). We call upon you, our elected leaders, to please support this bill that will support the rights of Indigenous people to participate in our democracy. We thank you for your service and for doing all that you can to further this bill. With Best Wishes, Beth Osnes, PhD, Michelle Ellsworth, Uli Miller, Lerato Osnes along with all of us who work at and are a part of SPEAK (https://speak.world)