A bill to prohibit the conduct of a first-use nuclear strike absent a declaration of war by Congress. 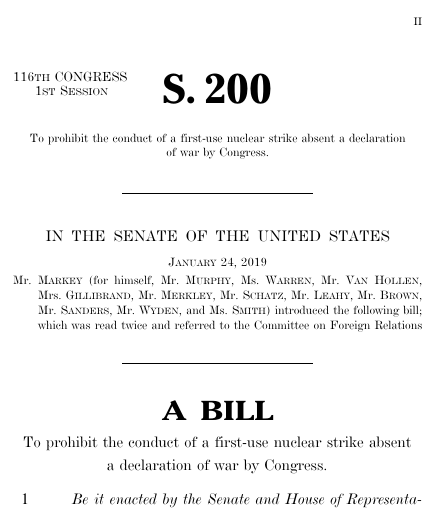 This bill is in the first stage of the legislative process. It was introduced into Congress on January 24, 2019. It will typically be considered by committee next before it is possibly sent on to the House or Senate as a whole.

Sisters of St. Francis, Clinton, Iowa We, the Sisters of St. Francis of Clinton, Iowa, Associates and Sojourners, oppose the continued maintenance, research, development, and threatened use of the United States arsenal of nuclear weapons.We call on our government to fulfill our commitments to nuclear disarmament as ...
Your organization’s position statement could be on this page! Register your organization’s position on this bill »

S. 200 is a bill in the United States Congress.

Bills numbers restart every two years. That means there are other bills with the number S. 200. This is the one from the 116th Congress.

A companion bill for this bill, hr669-116, has not yet been enacted. If you are interested in this bill, you should also see its companion. The bill's primary sponsor is a Democrat. The bill is assigned to the Senate Foreign Relations committee. There are 0 related bills in Congress.

This position statement was submitted by Sisters of St. Francis, Clinton, Iowa on Apr 12, 2019.

We, the Sisters of St. Francis of Clinton, Iowa, Associates and Sojourners, oppose the continued maintenance, research, development, and threatened use of the United States arsenal of nuclear weapons.We call on our government to fulfill our commitments to nuclear disarmament as agreed to in the Non-Proliferation Treaty of 1970 and the Comprehensive Test Ban Treaty of 1996.

We believe in the sanctity of every human life and of all creation.Nuclear weapons are a grave danger to all forms of life. We choose to work for systemic change on behalf of poor and marginalized persons.The cost and global competition surrounding nuclear weapons keeps individuals and whole societies poor and marginalized.Currently the US spends an amount equal to nearly half the cost of its Food Stamp Program just to clean up the radioactive waste from new nuclear production and to maintain existing warheads. We have committed ourselves to active nonviolence as a way of life and to the promotion of nonviolence in society.Maintaining, rebuilding and threatening the use of nuclear force make us as Americans a party to intolerable violence. We note that sixty years after the nuclear violence perpetuated on Japan, at least eight nations, and perhaps non-national groups as well, possess nuclear weapons. The maintenance and proliferation of nuclear weapons threatens the security of the Earth.

We will bravely publicize this position regardless of the consequences. We support efforts to enforce the agreements that our government has made regarding nuclear disarmament. We support legislative efforts to eliminate spending on nuclear weapons and to divert those resources to human development. We support and will participate in efforts to educate other US citizens regarding the extensive US violations of the Non- Proliferation Treaty. We support those called to civil disobedience against the tyranny of nuclear armament. We support individuals who are called to publicly confront the "nuclear bullying" done in our name.