A bill to amend the Commodity Exchange Act and the Securities Exchange Act of 1934 to modify provisions relating to whistleblower incentives and protection, and for other purposes. 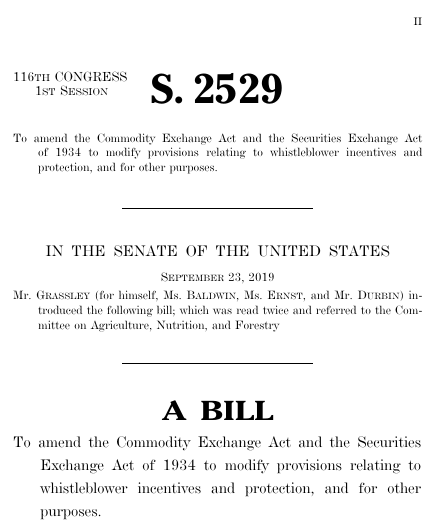 This bill is in the first stage of the legislative process. It was introduced into Congress on September 23, 2019. It will typically be considered by committee next before it is possibly sent on to the House or Senate as a whole.

Bills numbers restart every two years. That means there are other bills with the number S. 2529. This is the one from the 116th Congress.

The bill is assigned to the Senate Agriculture, Nutrition, and Forestry committee. The bill's primary subject is Finance and financial sector.

This position statement was submitted by Kohn, Kohn and Colapinto on Oct 15, 2020.

Less than two weeks after the U.S. Securities and Exchange Commission unanimously praised its Dodd-Frank Act whistleblower reward program, the first-ever national opinion poll on whistleblowers was publicly released. It was great news for whistleblowers and another blow to corporate fraudsters.

According to the poll, 81% of likely voters polled believe that Congress should prioritize enacting laws to protect corporate employees who report fraud. Voters not only wanted to see corporate whistleblowers protected, but over a quarter of them, 27%, stated that legislation should be an immediate priority for Congress.

Given pending legislation concerning COVID-19, and other issues widely supported by voters from all political parties, the fact that over a quarter of likely voters polled wanted immediate action enhancing corporate whistleblower laws is highly significant.

Whistleblowing has never been viewed as an election issue. The stereotypes that often degrade whistleblowers — snitch or disgruntled employee — have masked the change in public perception on this issue. Politicians would be wise to take note.

In fact, in response to another polling question, 44% of likely voters indicated that they would be more likely to vote for a candidate who supports stronger protections for corporate whistleblowers. Nearly half of all those polled view whistleblowing not only as a positive virtue but they also see it as a factor that could influence their vote.

The online newspaper, Whistleblower News Network, commissioned the poll. However, the agency that conducted the poll was the highly rated Marist poll.

The Marist poll is among only a handful of A+ rated polls. This honor was conferred by FiveThirtyEight, an independent organization that monitors national polling and rates polls with a score from A+ to F. Thus, the findings of Marist are an accurate depiction of where the American voter stands today. And today, that voter stands with whistleblowers.

Looking deeper into the Marist survey, it is clear that support for whistleblowers crosses party lines and demographics. For example, with a margin of error of only 3.4%, Marist determined that 88% of Democrats, 82% of Independents and 74% of Republicans polled believed that Congress should prioritize passing laws to protect corporate whistleblowers who expose fraud. Whistleblower protection is truly a bipartisan issue.

Additionally, all segments of the American people support these reforms. Many of the divisions seen in the voting public simply do not exist when it comes to endorsing stronger protections for whistleblowers.

Regardless of education, income or race, the American public is united on this question. Once again, the objective polling results of Marist confirm these results. On the issue of whether Congress should prioritize passing new corporate whistleblower laws, support transcended all demographics.

There is a clear consensus that whistleblowers need to be protected and supported. On the specific question as to whether or not Congress should enact stronger corporate whistleblower laws, the results outlined above are conclusive. This is good news for the bipartisan group of senators who are supporting the Whistleblower Programs Improvement Act, S. 2529.

This law would prohibit retaliation against internal whistleblowers who raise concerns within corporate compliance programs under the Dodd-Frank Act. The bill also addresses the long delays experienced by whistleblowers in obtaining reward payments. It establishes a one- year deadline for adjudicating Dodd-Frank Act whistleblower award decisions.

The Whistleblower Programs Improvement Act should also be improved to address some of the issues recently raised in the SEC whistleblower rulemaking proceedings. Specifically, there was considerable confusion (and opposition) to changes in the related action provision of the Dodd-Frank Act.

That provision was designed to encourage whistleblowers who give information to the SEC to also cooperate with other federal law enforcement agencies when violations of the securities laws also implicate other federal infractions. The commission voted itself discretion to deny related action awards. This discretion can be abused. Strict legislative restraints are necessary to ensure that Congress’ intent to encourage whistleblowers to fully cooperate with all federal law enforcement agencies is protected.