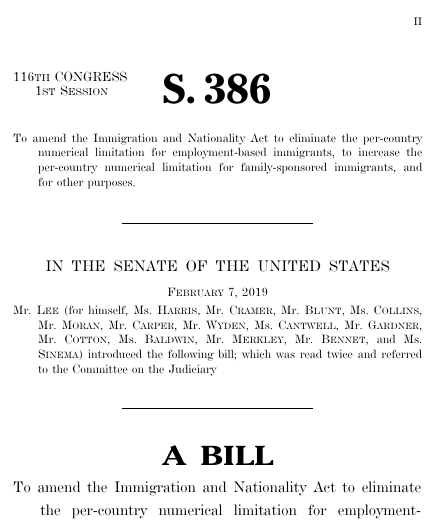 This bill was introduced on February 7, 2019, in a previous session of Congress, but it did not receive a vote.

U.S. Tech Workers This bill would dramatically change our employment Green Card distribution system by eliminating a safeguard that prevents Green Card numbers from being monopolized by citizens of one or two countries. Known as the “per country cap,” each country is allotted 7% …
Your organization’s position statement could be on this page! Register your organization’s position on this bill »

Bills numbers restart every two years. That means there are other bills with the number S. 386. This is the one from the 116th Congress.

This position statement was submitted by U.S. Tech Workers on Sep 26, 2019.

This bill would dramatically change our employment Green Card distribution system by eliminating a safeguard that prevents Green Card numbers from being monopolized by citizens of one or two countries. Known as the “per country cap,” each country is allotted 7% of 140,000 employment-based Green Cards annually; this provision ensures that employment-based visas are available to a truly global talent pool in a variety of occupational sectors.

It should not be scrapped; eliminating it would benefit one industry (Big Tech) and two groups of applicants (Indian tech workers and Chinese investors) and squeeze out all others. There is nothing “fair” about the bill.

• The foreign contract workers accepted the arrangement because they were promised Green Cards after a few years. Because more Green Cards were promised than can be delivered under our legal system, the waiting list has grown over time. No contract workers are being forced to return home, because H-1B visas can be extended past the six years, thanks to Congress passing the American Competitiveness in the 21st Century Act (AC21) that allows H-1B visa workers to remain in the United States indefinitely if an application for a Green Card has been applied for. Because so many workers from India were recruited, they have to wait in a longer line for a Green Card under our current rules.

• Under current rules, citizens of India are actually getting about 25% of all the professional employment Green Cards each year, more than the 7% because of the “spillover effect” – some countries do not exhaust their 7% quota, so leftover Green Cards are given to the country requiring more. If this bill becomes law, citizens of India will get more than 90% of the professional employment Green Cards, according to USCIS – for at least the next 10 years. Green Cards would be unavailable to applicants from all other parts of the world (and many other occupations) for at least a decade, thus creating a new backlog for citizens from other countries.

• The IT contract workers (predominantly from India) overwhelmingly tend to be ordinary workers hired in large batches every year. In contrast, the Green Card applicants from the rest of the world often are individually sponsored by a wider variety of employers, not as part of a business model designed to exploit the temporary visa system. This would be a step away from a merit-based system.

• A bill with such sweeping implications for U.S. workers should not be passed without a hearing and without the opportunity for members to offer amendments. But lobbyists and lead sponsors of the bill want to push this bill quietly without a formal hearing.

• HR 1044 reportedly also includes a provision to eliminate the per country cap on the EB-5 category, which enables foreign investors to receive Green Cards. If passed, the result would be that primarily Chinese investors would receive these Green Cards, with citizens of other countries largely squeezed out.