To place a moratorium on permitting for mountaintop removal coal mining until health studies are conducted by the Department of Health and Human Services, and for other purposes. 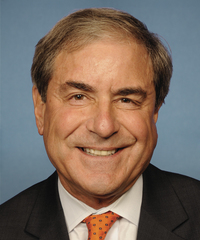 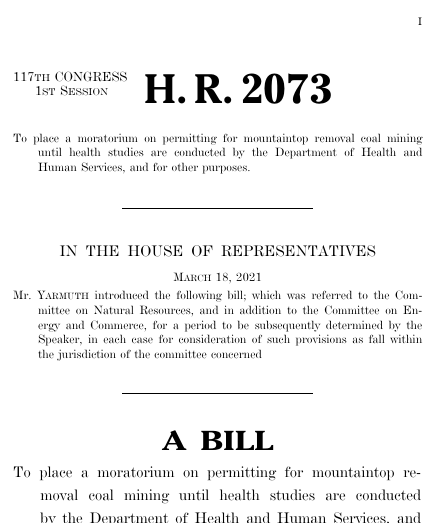 This bill is in the first stage of the legislative process. It was introduced into Congress on March 18, 2021. It will typically be considered by committee next before it is possibly sent on to the House or Senate as a whole.

Bills numbers restart every two years. That means there are other bills with the number H.R. 2073. This is the one from the 117th Congress.

This position statement was submitted by Appalachian Community Health Emergency Campaign on May 10, 2021.

Appalachian Communities Health Emergency Act introduced Bill would halt new mountaintop removal pending definitive health study WASHINGTON—U.S. House representatives today introduced the Appalachian Communities Health Emergency (ACHE) Act, H.R. 2073. The bill would halt new or expanded mountaintop removal coal mine permits until and unless the Department of Health and Human Services, upon receiving a comprehensive health study, concludes that the process poses no threat to public health. Rep. John Yarmuth, (Ky-3), the lead sponsor of the bill, said, “For far too long, reckless mountaintop removal mining practices have wreaked havoc on the air, water, and land throughout coal communities. We also see some of the worst health outcomes in areas surrounding these mining operations, yet to this day there still has not been a single federal health study completed on the risks associated with the practice. Our government should be ensuring the health and safety of its citizens before it considers a single new permit to allow this destruction to continue. We owe it to coal country, to those families, and to our nation’s future.” Before she died of cancer, Vickie Terry, who lived next to a mountaintop removal site in Claiborne County, Tn., said, “Coal companies are blowing up the mountains where I live. We've seen alarming increases in cancer and other illnesses since mountaintop removal began here, and we deserve answers. Our health is not considered in the permit decisions, even though there are more than two dozen peer-reviewed studies linking deadly health impacts to mountaintop removal. To protect the health of my family and community, we need the ACHE Act.” One study found over 1,200 “excess deaths” annually in mountaintop removal areas, after accounting for other factors such as smoking and obesity. Another study, conducted in the lab by scientists with the Mary Babb Randolph Cancer Center, was titled “Appalachian Mountaintop Mining Particulate Matter Induces Neoplastic Transformation of Human Bronchial Epithelial Cells and Promotes Tumor Formation.” “The worth of human health and life in the communities is incalculable,” said Kathy Selvage of Wise County, Va., a long-term Appalachian activist who lives near several mountaintop removal sites. “Coal companies must protect the health of their neighboring communities. All the science to date informs us that mountaintop removal is a deadly public health threat. The ACHE Act will provide us with answers and save the lives of those in communities who have no choice but to breathe the dust from these sites.” In 2017, the Trump administration abruptly canceled a review by the National Academies of Sciences, Engineering and Medicine intended to better understand the health impacts of mountaintop removal and identify areas needing more study. 2 “West Virginia has once again, for the tenth straight year finished last in the Gallup Well Being States Index,” said Bo Webb, ACHE campaign coordinator. “The suffering of those who reside in mountaintop removal (MTR) communities of Appalachia is not a mystery. The elevated rates of cancer, birth defects and other negative health consequences in these communities is due to silica dust and other toxins generated from blasting mountains into ashes to extract small seams of coal. This may be an inconvenient truth to the profiteers of MTR, but it is a plain sad truth to the human suffering that comes with blowing up a mountain directly above the homes of the vulnerable.