H.Res. 353: Expressing support for the recognition of April as Arab American Heritage Month and celebrating the heritage and culture of Arab Americans in the United States. 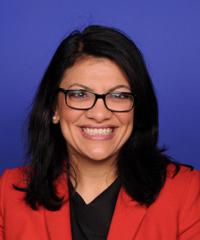 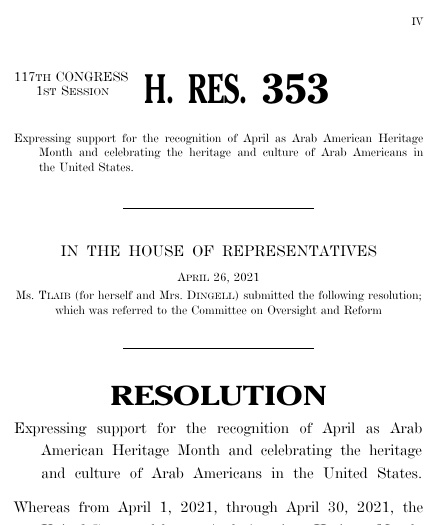 This resolution is in the first stage of the legislative process. It was introduced into Congress on April 26, 2021. It will typically be considered by committee next before it is possibly sent on to the House or Senate as a whole.

H.Res. 353 is a simple resolution in the United States Congress.

Resolutions numbers restart every two years. That means there are other resolutions with the number H.Res. 353. This is the one from the 117th Congress.

GovTrack.us. (2022). H.Res. 353 — 117th Congress: Expressing support for the recognition of April as Arab American Heritage Month and celebrating the …. Retrieved from https://www.govtrack.us/congress/bills/117/hres353

Expressing support for the recognition of April as Arab American Heritage Month and celebrating the heritage and culture of Arab Americans in the United States, H.R. Res. 353, 117th Cong. (2021).

This position statement was submitted by Arab America Foundation on Mar 3, 2022.

The Arab America Foundation promotes the Arab heritage, educates Americans about Arab identity, and connects and empowers Arab Americans throughout the U.S.

During the month of April, the Arab America Foundation formally recognizes the achievements of Arab Americans through the celebration of National Arab American Heritage Month (NAAHM). Across the country, cultural institutions, school districts, municipalities, state legislatures, public servants, and non-profit organizations issue proclamations and engage in special events that celebrate our community’s rich heritage and numerous contributions to society.

Arab America and the Arab America Foundation launched the National Arab American Heritage Month initiative in 2017, with just a handful of states recognizing the initiative. Each year, our grass-roots network of over 250 Arab American volunteers in 28 states gathers hundreds of proclamations from their states, counties, municipalities, and local school districts.

The President of the United States recognized the month of April as National Arab American Heritage Month with a special commemorative letter to our organization. In 2021, Congress, the U.S. Department of State, and 37 state governors issued proclamations commemorating the initiative.

We are spearheading a national campaign to have state legislatures and governors across the U.S. recognize National Arab American Heritage Month with a bill or joint resolution. To date, Illinois, Oregon, and recently Virginia have passed legislation designating the initiative.

The Arab America Foundation supports H.Res. 353 and strongly urges members of Congress to pass this resolution recognizing the contributions Arab Americans have made to the diversity of our great nation.