A bill to provide for nonpreemption of measures by State and local governments to divest from entities that engage in certain boycott, divestment, or sanctions activities targeting Israel or persons doing business in Israel or Israeli-controlled territories, and for other purposes. 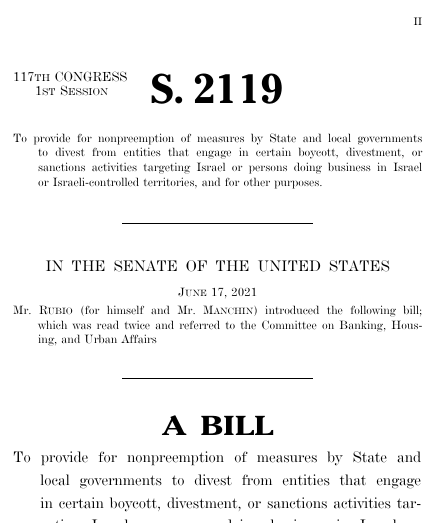 This bill is in the first stage of the legislative process. It was introduced into Congress on June 17, 2021. It will typically be considered by committee next before it is possibly sent on to the House or Senate as a whole.

Endowment for Middle East Truth (EMET) 82% of Jews think BDS is antisemitic, according to AJC’s 2019 Survey of American Jewish Attitudes about Antisemitism. BDS supporters “often say they want to pressure Israel to change its official policies. Yet BDS leaders have never agreed on a clear …
Your organization’s position statement could be on this page! Register your organization’s position on this bill »

Bills numbers restart every two years. That means there are other bills with the number S. 2119. This is the one from the 117th Congress.

The bill is assigned to the Senate Banking, Housing, and Urban Affairs committee.

This position statement was submitted by Endowment for Middle East Truth (EMET) on Oct 13, 2021.

82% of Jews think BDS is antisemitic, according to AJC’s 2019 Survey of American Jewish Attitudes about Antisemitism. BDS supporters “often say they want to pressure Israel to change its official policies. Yet BDS leaders have never agreed on a clear set of recommended policy changes, let alone a plan and a strategy for promoting them" (Cary Nelson, 'Israel Denial').

It's impractical. -BDS seeks to impose a right for all Palestinians to return to Israel within its pre-1967 borders. -PA Chairman Mahmoud Abbas does NOT support the BDS movement —The Case Against Academic Boycotts of Israel -One of its principles is “respecting, protecting and promoting the rights of Palestinian refugees to return to their homes and properties as stipulated in UN Resolution 194.” This resolution is actually from 1948 and therefore has nothing to do with post-1967 borders -“Norman Finkelstein noted the ‘cult’-like features of BDS, calling into question the usefulness of its political analysis and the integrity of its leadership.” —The Case Against Academic Boycotts of Israel -“Despite the prominence and publicity of the boycott and the multitude of divesting companies, the financial markets’ valuations of targeted companies or even the South African financial markets themselves were not visibly affected.” Basically, when someone sells stock, someone else will buy it. -Siew Hong Teoh, Ivo Welch and C. Paul Wazzan, 1999

It's not helpful to Palestinians. -BDS offers nothing tangible or concrete to the Palestinian people it claims to champion. -“[I]t allows anti-colonialist whites to see themselves as rescuing helpless brown victims, a dynamic enhanced by treating Palestinians as blameless victims without agency.” —Dreams Deferred -It “implies that all of Israel’s Arab-Palestinian citizens are in such a sorry state that they need immediate and urgent international support.” —Dan Avnon, Anti-Zionism on Campus -The BDS movement was started in 2001 at the UN Conference Against Racism in Durban, South Africa. Anti-Israel forces hijacked the meeting. However, it didn’t get much press because it was only days before 9/11. Many proponents falsely claim that it was started in 2005 by a bunch of civil society organizations.

It's violent. -Founder and director of the Palestinian Human Rights Monitoring Group Bassem Eid “was threatened, and his appearance at a South African university had to be canceled when BDS proponents violently disrupted his speech.” -“Rahim Kurwa, an SJP leader at UCLA, emphasized that the BDS guidelines specifically ask followers in solidarity with the Palestinian struggle to cease to participate in projects that promote cooperation between Israelis and Palestinians.” —Academic Freedom, Freedom of Expression, and the BDS Challenge: A Guide and Resource Book for Faculty -“The first organization listed as signatory of the BDS call was the Council of National and Islamic Forces in Palestine, [which] includes several U.S.-designated terrorist groups, including Hamas, the Popular Front for the Liberation of Palestine (PFLP), the Democratic Front for the Liberation of Palestine, and Palestinian Islamic Jihad.” —Mosaic Magazine -The Popular Front for the Liberation of Palestine and PFLP-General Command are on the State Department’s Designated Foreign Terrorist Organizations list “and are committed to the elimination of the Jewish state through violent means.” -The Council of National and Islamic Forces in Palestine was founded in 2000 at the beginning of the Second Intifada by Yasser Arafat and meant to be “organizing a unified effort among major Palestinian factions to oppose Israel and coordinate terror attacks.” —Cary Nelson, Rachel S. Harris and Kennet W. Stein, The Case Against Academic Boycotts of Israel -“[I]n 2010, Noam Chomsky said he was deeply troubled by how the BDS movement enflames the most reactionary constituents of Israeli society, worrying that ‘a call for an academic boycott on Tel Aviv University [for example] will strengthen support for Israel and US policy.’” -The agenda for the “First Palestinian Conference for the Boycott of Israel” includes “Emphasize that the BDS campaign does not only target Israel's economy, but challenges Israel's legitimacy.” (Taken directly from the agenda, linked to by NGO Monitor)