A bill to amend title 11, United States Code, to improve the treatment of student loans in bankruptcy, and for other purposes. 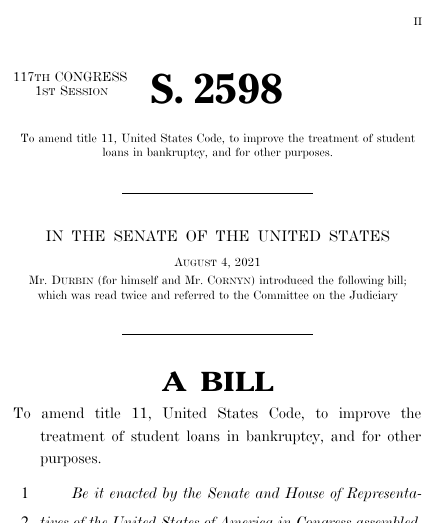 This bill is in the first stage of the legislative process. It was introduced into Congress on August 4, 2021. It will typically be considered by committee next before it is possibly sent on to the House or Senate as a whole.

Bills numbers restart every two years. That means there are other bills with the number S. 2598. This is the one from the 117th Congress.

This position statement was submitted by Student Loan Justice on Aug 5, 2021.

We strongly applaud Senator's Dick Durbin (IL) and John Cornyn (TX) for introducing The Fresh Start Through Bankruptcy Act of 2021. Returning bankruptcy protections to federal student loans is the first step that must be taken to address this national crisis. Holding educational institutions nominally accountable for outcomes is also needed.

The Founders called for uniform bankruptcy laws ahead of the power to raise an army, declare war, and create a judiciary in Article I, Section 8 of the US Constitution. Today, student loans stand as the only type of loan in the country to be uniquely stripped of this constitutional enshrined protection.

The consequences of this have been disastrous. 45.4 million citizens are burdened under $1.6 Trillion in federal student loan debt. The default rate for the class of 2004 is 40%, but these people borrowed less than a third of what is borrowed today. Even before the covid-19 pandemic , 80% of these borrowers were either unable to pay on their loans, or were paying but their loan balances were increasing. The default rate for sub-prime home mortgages, by contrast, was only 20%.

Student debt in over a third of U.S. States now exceeds the entire state budget. Older borrowers (over 35) now outnumber younger borrowers (under 35), and they owe far more, despite having borrowed far less. This is- to be blunt- a catastrophically failed lending system, and the tax-paying voters being financially harmed by it span the political spectrum.

We believe that these loans should be completely cancelled by executive order such that no money would be needed from the Treasury and nothing would be added to the national debt. The lending system should be ended and replaced with a more rational funding model. Returning bankruptcy rights is the first step to take- and very least that Congress can do.

We ask our 1.1 million members, and citizens everywhere to demand that their senators pass this long overdue, and much needed legislation.