A bill to award a Congressional Gold Medal to the female telephone operators of the Army Signal Corps, known as the "Hello Girls". 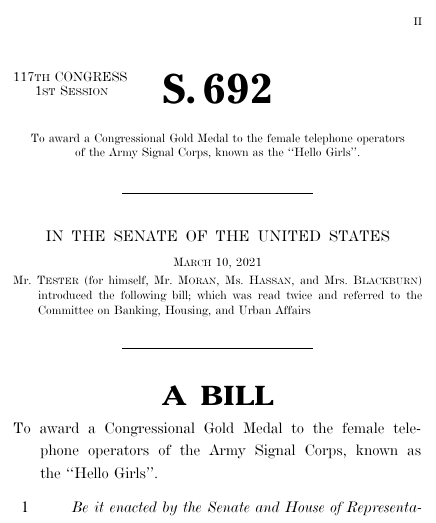 This bill is in the first stage of the legislative process. It was introduced into Congress on March 10, 2021. It will typically be considered by committee next before it is possibly sent on to the House or Senate as a whole.

Prognosis
2% chance of being enacted according to Skopos Labs (details)
Source
Congress.gov

S. 692 is a bill in the United States Congress.

Bills numbers restart every two years. That means there are other bills with the number S. 692. This is the one from the 117th Congress.

This bill has a 2% chance of being enacted.

A companion bill for this bill, hr4949-117, has not yet been enacted. If you are interested in this bill, you should also see its companion. The bill's primary sponsor is a Democrat. The bill is assigned to the Senate Banking, Housing, and Urban Affairs committee. There are 0 related bills in Congress. The bill's primary subject is Armed forces and national security.

This position statement was submitted by Women In Military Service For America Memorial Foundation, Inc. on Apr 27, 2021.

Dear Senator Tester, As the President of the Women In Military Service For America Memorial Foundation, I write on behalf of the Military Women's Memorial to offer our endorsement and support for S.692, the "Hello Girls" Congressional Gold Medal Act. The Hello Girls were recruited after male infantrymen struggled to connect calls quickly or communicate with their French counterparts. The bilingual Hello Girls served at military headquarters and command outposts in the field alongside the American Expeditionary Forces in France. Despite their outstanding service and the military oath they took, they were denied veteran status and benefits when they returned home. Two days after the Armistice of World War One, the chief signal officer for the First Army stated in his official report "a large part of the success of the communications of this Army is due to...a competent staff of women operators." Thirty of the operators received special commendations, many signed personally by Pershing, and Chief Operator Grace Banker was awarded the Distinguished Service Medal. “These women were in positions of extreme trust, because every command to fire or cease-fire or advance or retreat in World War I was made by telephone,” Elizabeth Cobbs, author of the book, Hello Girls: America’s First Women Soldiers, said in an interview. “And that telephone call was connected by a woman who could hear every word.” The job was fast-paced and exhausting. The Signal Corps often connected 150,000 calls a day, and the coded language they used to mask critical details about the Army’s positions and personnel changed frequently to deter the enemy. For example, Toul, the French city where the Army was based, could be identified by the code “Podunk” one day and “Wabash” the next. Male recruits had proved largely inexpert in the work, Cobbs said. It took a man an average of 60 seconds to connect a call, while it took a woman only 10. The difference could mean winning or losing a battle. As the ONLY national memorial honoring women in uniform who have defended America, we strongly urge the Senate to advance this legislation. While none of the Hello Girls are alive, their families and other military women are watching and waiting. Sincerely, Phyllis J. Wilson, BSN, RN Chief Warrant Officer Five, U.S. Army, Retired President Women In Military Service For America Memorial Foundation