Gaetz is the representative for Florida’s 1st congressional district (view map) and is a Republican. He has served since Jan 3, 2017. Gaetz is next up for reelection in 2022 and serves until Jan 3, 2023.

Gaetz is among the Republican legislators who participated in the months-long, multifarious attempted coup following the 2020 presidential election. Shortly after the election, Gaetz joined a case before the Supreme Court calling for all the votes for president in Georgia, Michigan, Pennsylvania, and Wisconsin — states that were narrowly won by Democrats — to be discarded, in order to change the outcome of the election, based on lies and a preposterous legal argument which the Supreme Court rejected. (Following the rejection of several related cases before the Supreme Court, another legislator who joined the case called for violence.) Gaetz was also a part of a coordinated campaign by the Trump Administration to pressure the Vice President to exclude some Democratic states from the electoral count rather than follow the Constitution's procedure in which Congress may vote to exclude electors, and other extrajudicial strategies to suppress certified election results. On January 6, 2021 in the hours after the insurrection at the Capitol, Gaetz voted to reject the state-certified election results of Arizona and/or Pennsylvania (states narrowly won by Democrats), which could have changed the outcome of the election. These legislators have generally changed their story after their vote, claiming it was merely a protest and not intended to change the outcome of the election as they clearly sought prior to the vote. The January 6, 2021 insurrection at the Capitol disrupted Congress’s count of electors that determined the outcome of the presidential election with the goal to prevent President Joe Biden from taking office.

On March 30, 2021, the New York Times reported that the Department of Justice was investigating Rep. Matt Gaetz over allegedly engaging in a sexual relationship with an underage girl. Over the ensuing two weeks, the allegations expanded signficantly and on April 9 the House Committee on Ethics opened an investigation into allegations that Gaetz was engaging in a sexual relationship with underage girl, using illicit drugs, sharing inappropriate images or videos on the House floor, misusing state identification records, converting campaign funds to personal use, and/or accepting a bribe, improper gratuity, or impermissible gift.

In February 2019, Gaetz posted a threatening tweet aimed at Michael Cohen, President Trump's former personal attorney the night before Cohen was scheduled to testify before the House Judiciary Committee regarding crimes for which Cohen had been found guilty and in which, according to federal prosecutors, the President participated. Gaetz was referred to the Florida Bar for investigation and possible discipline. In August 2019, the Florida Bar announced it had found "no probable cause" that Gaetz had violated its rules and closed its investigation. In August 2020, the House Committee on Ethics admonished Gaetz for unprofessional behavior.

Head over to Rep. Matt Gaetz’s website. If you are having a problem with a government agency, look for a contact link for casework to submit a request for help. Otherwise, look for a phone number on that website to call his office if you have a question.

Not all Members of Congress will accept messages from non-constituents. You can try your luck by visiting Gaetz’s website. Otherwise, try contacting your own representative:

You are currently on the website GovTrack.us, which has no affiliation with Gaetz and is not a government website. Choose from the options above to find the right way to contact Gaetz. 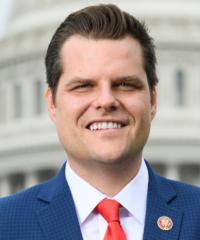 Gaetz is shown as a purple triangle ▲ in our ideology-leadership chart below. Each dot is a member of the House of Representatives positioned according to our ideology score (left to right) and our leadership score (leaders are toward the top).

The chart is based on the bills Gaetz has sponsored and cosponsored from Jan 3, 2017 to May 24, 2022. See full analysis methodology.

From Jan 2017 to May 2022, Gaetz missed 199 of 2,845 roll call votes, which is 7.0%. This is much worse than the median of 2.1% among the lifetime records of representatives currently serving. The chart below reports missed votes over time.