Marshall is the junior senator from Kansas and is a Republican. He has served since Jan 3, 2021. Marshall is next up for reelection in 2026 and serves until Jan 3, 2027.

He was previously the representative for Kansas’s 1st congressional district as a Republican from 2017 to 2020.

Marshall is among the Republican legislators who participated in the months-long, multifarious attempted coup following the 2020 presidential election. Shortly after the election, Marshall joined a case before the Supreme Court calling for all the votes for president in Georgia, Michigan, Pennsylvania, and Wisconsin — states that were narrowly won by Democrats — to be discarded, in order to change the outcome of the election, based on lies and a preposterous legal argument which the Supreme Court rejected. (Following the rejection of several related cases before the Supreme Court, another legislator who joined the case called for violence.) In the days leading up to January 6, Marshall had announced his intent to object on that day to the inclusion of some states in the final tally that determined the next president, which would have disenfranchised millions of voters based on lies, conspiracy theories, and preposterous legal theories all falsely claiming various sorts of mass fraud that did not occur. The announcement amplified the message that inspired the Jan. 6 insurrection at the Capitol. On January 6, 2021 in the hours after the insurrection at the Capitol, Marshall voted to reject the state-certified election results of Arizona and/or Pennsylvania (states narrowly won by Democrats), which could have changed the outcome of the election. These legislators have generally changed their story after their vote, claiming it was merely a protest and not intended to change the outcome of the election as they clearly sought prior to the vote. The January 6, 2021 insurrection at the Capitol disrupted Congress’s count of electors that determined the outcome of the presidential election with the goal to prevent President Joe Biden from taking office.

Head over to Sen. Roger Marshall’s website. If you are having a problem with a government agency, look for a contact link for casework to submit a request for help. Otherwise, look for a phone number on that website to call his office if you have a question.

Not all Members of Congress will accept messages from non-constituents. You can try your luck by visiting Marshall’s website. Otherwise, try contacting your own senator:

You are currently on the website GovTrack.us, which has no affiliation with Marshall and is not a government website. Choose from the options above to find the right way to contact Marshall. 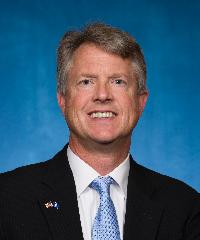 Marshall is shown as a purple triangle ▲ in our ideology-leadership chart below. Each dot is a member of the Senate positioned according to our ideology score (left to right) and our leadership score (leaders are toward the top).

The chart is based on the bills Marshall has sponsored and cosponsored from Jan 3, 2017 to May 25, 2022. See full analysis methodology.

Marshall was the primary sponsor of 4 bills that were enacted:

On the Nomination PN1018: John Patrick Coffey, of New York, to be General Counsel of the Department of the Navy
Nomination Confirmed 79/17 on Feb 9, 2022.

On the Nomination PN79-11: Vivek Hallegere Murthy, of Florida, to be Medical Director in the Regular Corps of the Public …
Nomination Confirmed 57/43 on Mar 23, 2021.

S.Res. 47: A resolution to provide for related procedures concerning the article of impeachment against Donald John Trump, former President …
Resolution Agreed to 89/11 on Feb 9, 2021.
This was a Senate Resolution on procedures for the trial of the former President. It needed only a simple majority to pass, but received 87 …

From Jan 2021 to May 2022, Marshall missed 19 of 740 roll call votes, which is 2.6%. This is on par with the median of 2.2% among the lifetime records of senators currently serving. The chart below reports missed votes over time.