Russian Interference in the 2016 Election

Current Status
House Intelligence has issued numerous subpoenas, a few of which may have been partially responded to. Senate Intelligence interviewed Donald Trump Jr. in closed session about the Trump Tower meeting.
Next Steps
The House has given committees the power to pursue subpoenas on their own. It's possible that House Intelligence may use this power. 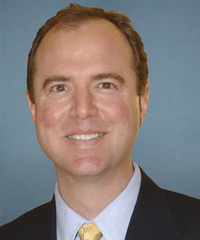 Schiff is chair of the House Permanent Select Committee on Intelligence which will investigate unanswered questions regarding Russia's interference in the 2016 election.

Burr is chair of the Senate Select Committee on Intelligence which will continue investigating Russian interference in the 2016 election into the 116th Congress.

Democrats, and some Republicans including those on the Senate Intelligence Committee accept the conclusion, while most other Republicans in Congress reject this claim. Republicans have largely united in carrying water for the president, conducting little oversight in the House committees with potential jurisdiction to probe the issue.

The House Intelligence Committee produced a report in March 2018 concluding there was zero collusion between Russia and the Trump campaign and that the Russian government did not interfere, but committee Democrats claimed they were excluded from the report’s drafting and publicly excoriated its findings.

Why? In a secretly-recorded tape obtained my MSNBC’s The Rachel Maddow Show, committee chair Devin Nunes was caught revealing that he didn’t want to embarrass the fellow Republican president because “We have to keep the majority. If we do not keep the majority, all of this goes away.”

Special Counsel Robert Mueller’s investigation and report has as much or more power than the House committees here. For example, Mueller can indict people -- and he has, indicting at least 36 people to date. Most prominent are former campaign chair Paul Manafort and former Trump lawyer Michael Cohen, who was sentenced to three years in prison in December stemming from charges brought by Mueller.

Still, there are some things that Congress’s committees can do -- and likely will, beginning in January under the new Democratic majority.

What investigations could find

Sen. Richard Burr, the Senate Intelligence Committee chair, has said that the Senate’s investigation will continue possibly for another six months. Sen. Angus King, an independent who caucuses with the Democrats, has said the committee is interviewing witnesses on the issue of collusion. But expect the House to do more of the heavy lifting moving forward when it comes to investigating Russia and Trump, at least while the chamber remains under Democratic control.

A June 2016 meeting occurred between Manafort, Donald Trump Jr., and Jared Kushner and Russian officials peddling dirt or damaging information about Hillary Clinton. This despite Trump Jr. originally claiming the meeting was to discuss a policy related to child adoption between the two countries. It’s illegal to receive such material -- it would be foreign assistance to a political campaign. For instance, Democrat Al Gore’s campaign immediately turned over similar information to the FBI when they received it in 2000, rather than keeping it secret.

Schiff plans to publicly release many transcripts of interviews with key figures, which the committee has thus far kept private. Schiff also intends to press Trump Jr.’s phone provider about the identities of people he called around that same time, which appear blocked on his phone records. Some have suggested that one of the blocked numbers may have been his father, Donald Trump himself.

Trump’s business dealings with and in Russia

Trump has tweeted -- in all capital letters, no less -- that “Russia has never tried to use leverage over me. I HAVE NOTHING TO DO WITH RUSSIA - NO DEALS, NO LOANS, NO NOTHING!”

However, it’s unclear whether that’s true. Trump certainly has a long history of business dealings with Russia going back to at least 1987. However, whether he has current deals with Russia or Russian entities is unconfirmed.

Schiff plans to probe Trump’s business dealings, such as the possibility that Russia laundered money through Trump’s company.

In the 1990s when Trump was bankrupt, the Germany-headquartered Deutsche Bank was the only institution willing to lend Trump money. Since then, he’s done large amounts of business with them -- to the point that Trump currently owes the bank about $360 million.

The bank has also been fined hundreds of millions of dollars for laundering money for Russian entities. Whether these facts are related is not currently publicly known. “We are going to be looking at the issue of possible money laundering by the Trump Organization, and Deutsche Bank is one obvious place to start,” Schiff told the New Yorker.

House Committee Republicans blocked a subpoena for the Director of National Intelligence to testify in July 2018 about Russia’s involvement in the 2016 election. This and other similar hearings would likely proceed under Democratic control.

In fact, Oversight Committee Democrats maintain a running list of at least 64 subpoena requests that Republicans have blocked. All (or nearly all) of these requests will go forward unimpeded in 2019.

There may also be further investigations into how social media companies including Facebook were used as a part of Russia’s interference campaign, but since our coverage of oversight here on GovTrack is scoped to Congress’s oversight of the executive branch and not of private companies, we won’t be covering that issue further.

What supporters of the investigation say

Democrats argue that American foreign policy may be unduly and wrongly influenced by a nation which sought to undermine our democratic norms, but we’re largely in the dark.

“There have long been credible allegations that Russian money was laundered through the Trump Organization. If Russia could show that Trump, his business or his immediate family had benefited from tainted money or broken the law — or if Trump believed they could — it would mean that Russia could exert pressure on Trump to influence U.S. foreign policy,” Rep. Schiff wrote in USA Today op-ed.

“The American people deserve to know that our president is acting in their interest and not his own financial self interest, or because he has been compromised by a foreign power,” Schiff continued. “Now, with a new Democratic majority in the House, we should be able to find out.”

Republicans counter that this whole Democratic obsession with Trump and Russian meddling is just seeing faces in the clouds, from a party upset and confused by their 2016 election loss that they were expected to win in a landslide.

“The mainstream media is not covering this, because they seem so focused on drinking the Russian Kool-Aid on terms of what is -- who is getting indicted by the special counsel, and instead focus on, look, was there any collusion between the Trump campaign and Russia?” former Republican House Intelligence Committee chair Nunes told CNBC. “Which the answer is no.”

Nunes also disputed the idea that the committee hasn’t done a good enough job probing the facts. “We have known this for a long time. Our committee really led this investigation. If you look at a lot of the facts that are now out, it's the facts that we found on the House Intelligence Committee.” 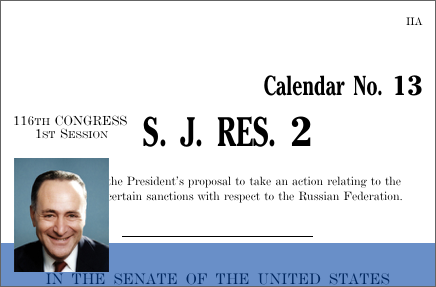 S.J.Res. 2: A joint resolution disapproving the President’s proposal to take an action relating to the application of certain sanctions ...

This Senate bill would require the reinstatement of sanctions against Russian individuals involved in 2016 election interference actions. It failed cloture on January 16, 2019. 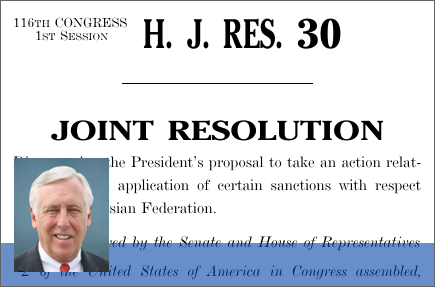 H.J.Res. 30: Disapproving the President’s proposal to take an action relating to the application of certain sanctions with respect to ...

This House bill would require the reinstatement of sanctions against Russian individuals involved in 2016 election interference actions. 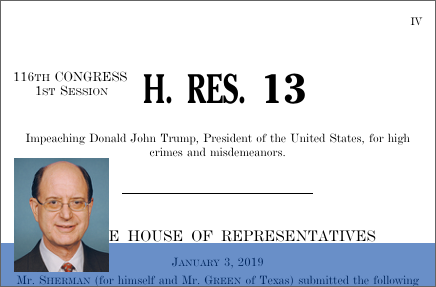 This bill includes in its list of high crimes and misdemeanors the claim that President Trump attempted to obstruct justice on matters related to the investigation of Russia's 2016 interference in the election.

House Intelligence Chair Schiff subpoenaed Attorney General Barr for documents and materials related Special Counsel Robert Mueller’s investigation, including all counterintelligence and foreign intelligence materials produced during the Special Counsel’s investigation, the full unredacted report, and the underlying evidence. The deadline was May 15, 2019. Barr did not respond. On May 22, 2019, Schiff announced the DOJ would begin to produce the requested materials "on a rolling basis" and that the subpoena was being left in effect should DOJ not follow through. It's unclear whether any documents have in fact been shared yet. On June 13, 2019, Schiff subpoenaed Rick Gates and Mike Flynn for information related to the 2016 election. The Senate Intelligence Committee heard from Donald Trump Jr. on June 12 in closed session. The committee has shared no information about what they learned.